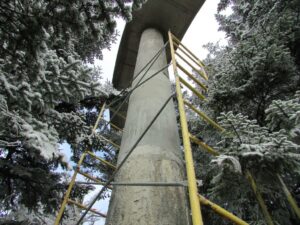 Great Smoky Mountains National Park officials announced that the Clingmans Dome Observation Tower has been reopened to the public. The rehabilitation work has been suspended for the winter and is expected to resume this Spring. The remaining work is expected to take approximately two weeks and will necessitate another short-term closure to complete.

Much of the needed rehabilitation work was completed this Fall, but the final surface overlay still needs to be completed. Deteriorated areas on the concrete columns and walls have been repaired, support walls have been stabilized at the base of the ramp, and stone masonry has been repaired.

Straddling the North Carolina and Tennessee state line at 6,643 feet, the tower is a prominent landmark and destination as the highest point in the park. The observation tower is a precedent-setting design of the National Park Service’s Mission 66 program, which transformed park planning, management, and architecture and fundamentally altered the visitor experience in national parks. Since 1959, millions of visitors have climbed the tower, where they can see distances of up to 100 miles over the surrounding mountains and valleys. Some minimal preservation work today on the tower will ensure that visitors continue to experience this unique structure spiraling up from the highest point in the park.