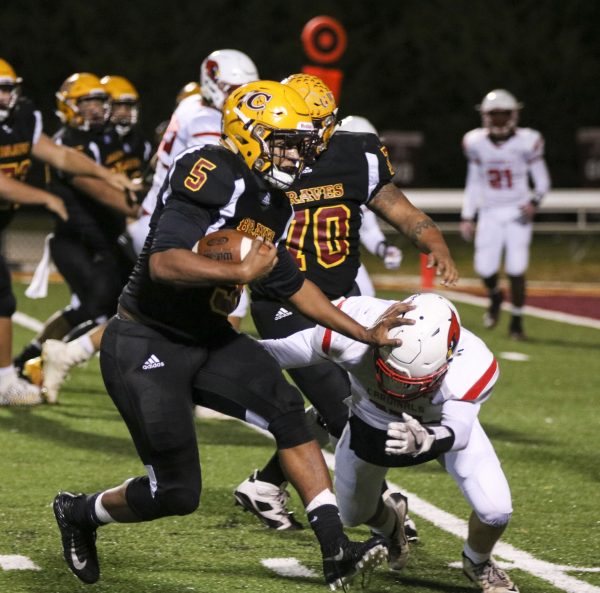 Cherokee bested Union Academy in a high-scoring affair to advance to the third round of the 1A state playoffs.  The Braves (11-1) put up 514 total yards of offense as they beat the Cardinals (8-5) by a score of 58-35 during a chilly game on the night of Friday, Nov. 17 at Ray Kinsland Stadium.

“I feel like we came out and were ready to play,” said Kent Briggs, Braves head coach.  “We knew how important it was to come out and start strong and we did.  You have to give credit to them (Union Academy).  They have good athletes and they’ve won eight games.  They came in here, and we knew it would be a challenge.  Our guys stepped up, and I’m very proud of the way we handled this second round playoff.”

He added, “When you play in the second round, you’re playing games against teams that are going to be good so we did a nice job as far as taking care of business.  Now, we’re in the third round so we need to step it up even more.”

On his team’s rushing effort, Coach Briggs noted, “We felt that would be an advantage to us – get out there and be physical and run the football.  We felt we have more of a physical football team than they do and that’s what we went out there and did tonight.” 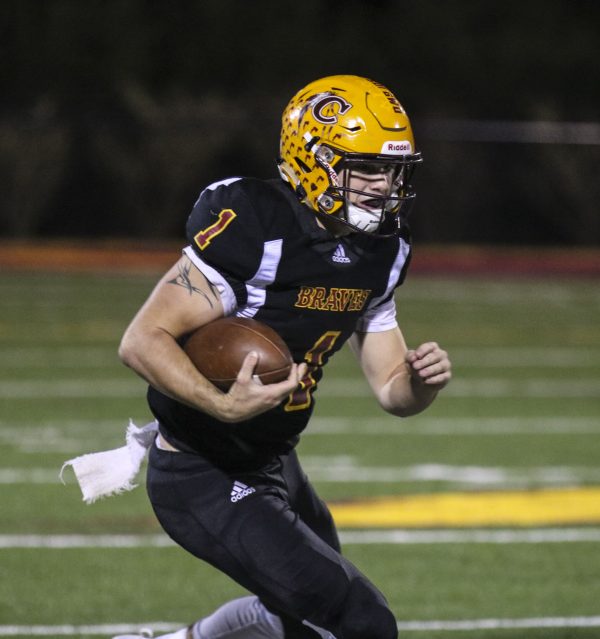 OFFENSE: Tye Mintz, Braves senior quarterback, runs the ball during the first half of Friday’s game against Union Academy. On the night, he carried the ball 12 times for 140 yards and three touchdowns and completed 5 of 10 passes for 96 yards.

Tye Mintz also completed 5 of 10 passes for 96 yards. His main target on the night was Cade Mintz, sophomore wide receiver, who caught three passes for 80 yards.

Isaiah Armachain, junior defensive lineman, led the Braves defensively with four tackles followed by Joaquin Layno with 3.5 and Cade Mintz with three.  Both Holden Straughan and Blake Smith had an interception in the game.

Union Academy was led by Garrett Melton, senior running back, who carried the ball 10 times for 86 yards and one touchdown.

Cherokee got going quickly in this contest and scored twice in the first quarter – both rushing touchdowns by Evans.  He carried the ball into the end zone from 10 yards out at the 7:45 mark and then three minutes later he hit paydirt again with a 4-yard touchdown run.  The Braves led 14-0 at the end of the first quarter.

The second quarter was a score fest with the Braves getting three touchdowns and Union Academy with two.  The Cardinals scored early in the quarter (11:51) as Hayden Gosnell threw a 7-yard touchdown pass to Alston Honeycutt.  Fast forward seven minutes, and Evans scored his third of the game on an 11-yard run.  At the 1:34 mark, Evans got into the end zone for the fourth time in the game on a 6-yard run.  The Cardinals answered immediately as Kalip McFadden ran the ensuing kickoff 72 yards to the house.  With 26 seconds left, Tye Mintz ran a quarterback sneak from one yard out to round out the scoring in the quarter, and the Braves took a 34-14 lead into the locker room. 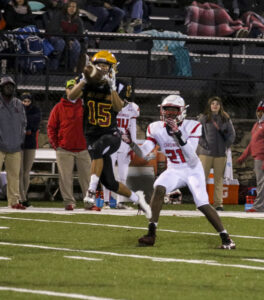 PICK: Cherokee’s Blake Smith (#15) goes up for an interception.

The chilly weather didn’t cool down the scoring in the third quarter.  Union Academy got on the board at the 4:40 mark as Gosnell threw to Derek Young for a 2-yard touchdown pass.  Twenty-three seconds later, the Braves scored again as Tye Mintz ran 59 yards up the gut of the Cardinals defense for a touchdown.  About a minute later (2:34), he would score again; this time on a 1-yard run, and Cherokee led 52-21 going into the final quarter.

Ledford got into the end zone at the 4:56 mark of the fourth with a 3-yard run.  Union Academy would add two more scores on a 66-yard run by Melton and a 55-yard pass from Gosnell to Carson Malone.

Cherokee won the game by a final of 58-35.  They advance to the third round of the 1A state playoffs, aka the regional semi-finals, against Thomas Jefferson (#3 seed) who defeated Elkin 55-34.  Cherokee (#2 seed) will host the game at Ray Kinsland Stadium on Friday, Nov. 24 at 7:30pm.