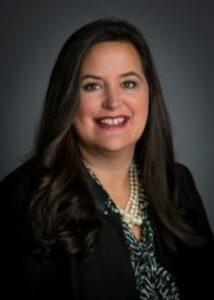 NEW YORK, NY— WX New York Women Executives in Real Estate (WX) named Sara Queen its 2017 Woman of the Year at their annual Gala held Thursday, Nov. 16 at The Pierre in New York City.  Queen, the daughter of EBCI tribal member Lois Queen, was honored for her accomplishments as a leader in real estate and her contributions to WX.

She is the chief company representative and liaison with co-investors in Brookfield’s U.S. Office Fund, Downtown Los Angeles Fund, DC Core Fund, as well as other joint venture partnerships. She is also responsible for the company’s occupancy profile and its annual strategic planning and budgeting activities. Queen oversees Brookfield’s lease administration, and previously oversaw Arts Brookfield, its award-winning arts and events group, in addition to serving on the Global Asset Management Committee and the Executive Committee for the U.S. Office Division.

Prior to joining Brookfield, she was senior vice president at Clarion Partners, the New York City-based real estate management and advisory services firm, in charge of managing a $1.9 billion portfolio of commercial properties. This included 35 offices, industrial, retail and multifamily assets located nationwide. Previously, she worked for Metropolitan Life Insurance, and spent five years with the company in roles of increasing responsibility in the investment and asset management groups.

Queen holds a master’s of business administration degree from Harvard Business School, and graduated cum laude with a bachelor’s of arts degree in economics and history from Wellesley College. She was named to the prestigious 40 Under 40 list by Crain’s NY Business (2008), and was selected as a Woman of Distinction by the Girl Scout Council of Greater NY and a Woman of Influence by Real Estate Forum in 2009 and 2014. She is a member of the Board of Directors for WX (New York Women Executives in Real Estate), Trinity Church (Manhattan), Friends of Governors Island, and Solar One. She is a former trustee of Grace Church School (Manhattan), where she led its efforts to build a high school, and continues to run its real estate committee.

The 2017 Woman of the Year Gala will also pay tribute to Alice Connell, a longtime WX member and previous Woman of the Year recipient who passed away recently. She leaves a legacy as a pioneering woman in commercial real estate who was committed to elevating the profiles of women in the industry.