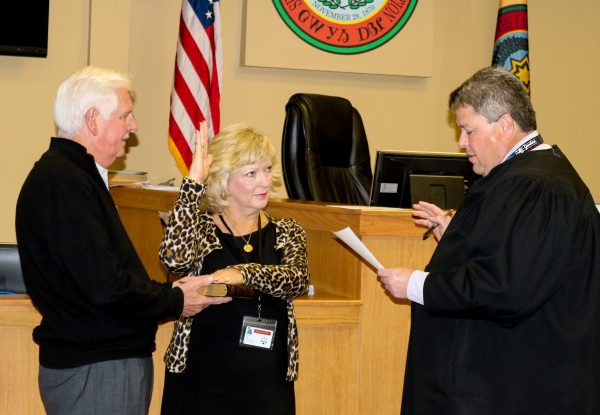 CLERK: Cherokee Tribal Court Chief Justice Kirk G. Saunooke (right) administers the Oath of Office to June Ray (center) who was sworn-in as the new Cherokee Tribal Clerk of Court in a courtroom in the Anthony Edward Lossiah Justice Center on the afternoon of Friday, Nov. 17. Danny Wingate holds the Bible for Ray in the photo. (SCOTT MCKIE B.P./One Feather)

A native of Haywood County, Ray began her career as a deputy clerk in the county in October 1981 following her graduation from Western Carolina University with a bachelor’s degree in business administration.  In November 1991, she was promoted to assistant clerk where she remained until she was appointed, in June 2002, to fulfill the term of her predecessor, Gill Henry, as Clerk of Superior Court of Haywood County, an elected position.  She remained in that position until her retirement on Oct. 31, 2017.  During her time as Clerk of Superior Court, she never faced opposition in an election.

“I just love the work,” Ray said of why she was drawn to working in a clerk’s office.  “I love working with people.  I love helping people.  It’s a passion of mine to try to help people solve their problems.”

She went on to say, “When I got ready to retire from the state, I didn’t just want to quit work.  This opportunity opened up, and I’m very fortunate and very happy to be here.  I hope I can serve the Tribe and hopefully please the people here.”