Jumper honored as he retires as Jackson County TDA chairman 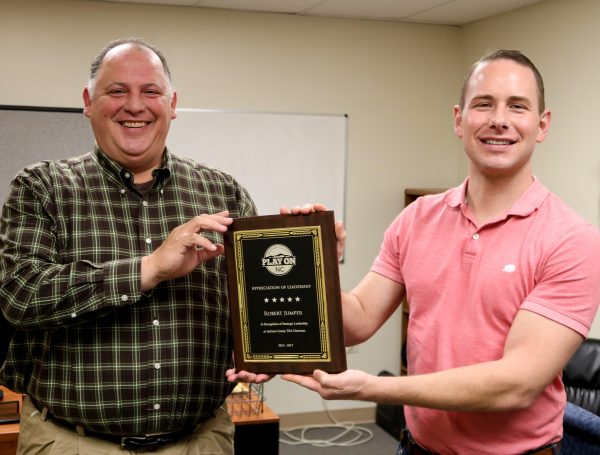 Robert Jumper, an EBCI tribal member who currently serves as the EBCI Destination Marketing interim director and Cherokee One Feather editor, has served as the Jackson County TDA (Tourism Development Authority) board chairman since before it was even the TDA.  He was honored recently by the board as he is stepping down from his post and passing the reins.

The TDA, which was officially established in 2013 by the North Carolina General Assembly, has a 15-member board.  The organization is funded by a 4 percent occupancy tax.

“The TDA Board of Directors set about creating an infrastructure that would sustain our tourism strategy and then systematically implemented the plan to build a great tourism organization,” noted Jumper.  “The results may be seen in the increased traffic and revenue figures that are directly attributable to the TDA. I think Jackson County is on a path of sustained tourism growth and it was an honor to play a small part in the success of the organization. Creating this kind of success is definitely a team effort, and I wish them the best.”

Nick Breedlove, TDA executive director, spoke highly of Jumper’s contributions to the organization over the years.  “Sometimes, there are conflicting viewpoints on a board, and you really have to be fair to all sides concerned, and I think Robert excelled at being fair and really putting what’s best for Jackson County in front and center of every meeting.  At any given meeting, we could have a topic that could be controversial or challenging, and Robert always brought a sense of calm and rational behavior.”

Breedlove added, “He has left big shoes to fill in terms of constant and steady leadership.  He is one of those people that you could go to at any time, with any issue, and walk away with very sound advice.  We will miss him leaving the TDA charge.”

He said Jumper helped to facilitate the consolidation of two tourism authority boards, in Sylva and Cashiers, to establish the TDA as well as develop the current job of executive director.  “We basically took members from both sides and just put them in one room.  It’s challenging when you’ve got people that have been doing marketing and PR activities a certain way and now you say, ‘this is how we’re doing it.’  Robert stepped on as chairman during a very divided time on our board, and I think his steady leadership is what got us through some of those rocky beginnings.”

Breedlove said Robert was the “voice of reason” in those early stages of the TDA.  “Part of his biggest accomplishment was identifying the need for an executive director.  With a board of 15 people, everybody was volunteering.  So, these are people with full-time jobs who are dedicating a couple of hours a month to the effort, and Robert, early on, saw the need for it to be a concerted effort on a daily basis of somebody to lead the charge of the TDA.”

During Jumper’s tenure, the TDA also went through a branding process with Jackson County through the “Play On” campaign and did an RFP (request for proposals) for a new advertising agency.

Breedlove concluded, “More than anything, I think the board recognizes his (Jumper) fair, steady leadership…he always brought us back around to our key goal of putting the tourist and our partners, the businesses, our economy, first.”

Vick Patel has been selected as the next TDA board chairman, and he will take the helm in December.