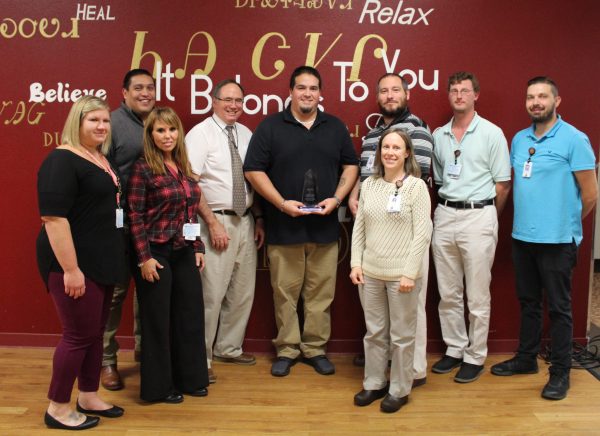 LAS VEGAS, Nev. – The Cherokee Indian Hospital’s IT Department was honored with the 2017 TribalNet Industry award at the recent 18th Annual TribalNet Conference & Tradeshow. This award recognizes IT excellence within the tribal community from an organization that covers gaming, tribal operations or healthcare of the 500+ tribes in this country. The CIHA IT department was awarded this prestigious award out of a group of 80 nominees.

“We were nominated on the basis of customer service, employee morale, and the reorganization of our department and how we transitioned into the new facility,” said Hugh Lambert, Cherokee Indian Hospital IT Director. “During transition, we closed at 4:30pm on Friday and opened up on Monday and everything worked! It was a once-in-a-career type of move and we pulled it off in three days. This award is a validation of all our hard work.”

In the last year alone, the CIHA IT department’s customer satisfaction score went from an average of 74 percent to 99 percent.

“The level of commitment that our team has to the job is extraordinary,” said Lambert.  “We are lucky to work in an environment where we can achieve high levels of success.”

Aaron Lewis, computer specialist, reiterated that same sentiment noting that the transition was a test for the entire IT staff. “We had a lot of preparations. New equipment was staged and set.  There was a lot of planning because this transition had to go like clockwork.  We are a family, there had to be a lot of communication and teamwork or it could have been disastrous. It was a test for us and we came out on top.”