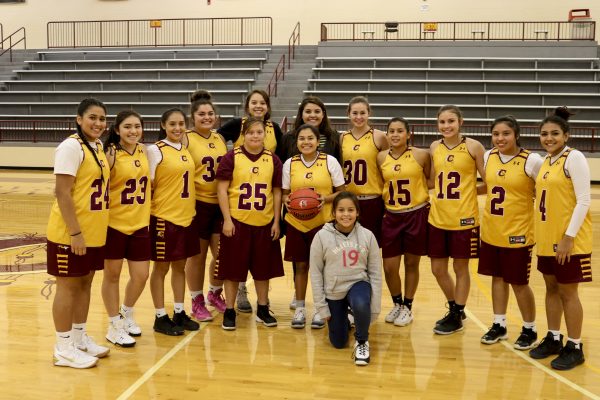 This year’s Cherokee Lady Braves varsity basketball team is not the tallest team out there, but what they lack in stature they more than make up for in grit, determination, and unity.  And, they all have one thing in mind – holding a state championship trophy in March.

The Lady Braves played several pre-season scrimmage games on Saturday, Nov. 11 and Coach Mintz was very pleased with their effort.  “They showed some pretty good things and some things I’m very excited about.”

The Cherokee Athletic Department has decided to postpone the start of the regular season until the end of the varsity football season – a move that is fine with Coach Mintz.

“I think that helps us out,” he noted.  “We’re young, and we’ll be able to teach these girls everything that we need from them and get them ready to play at the varsity level which is tough sometimes.  If you make a mistake, they pay for it because the other teams are pretty good.” 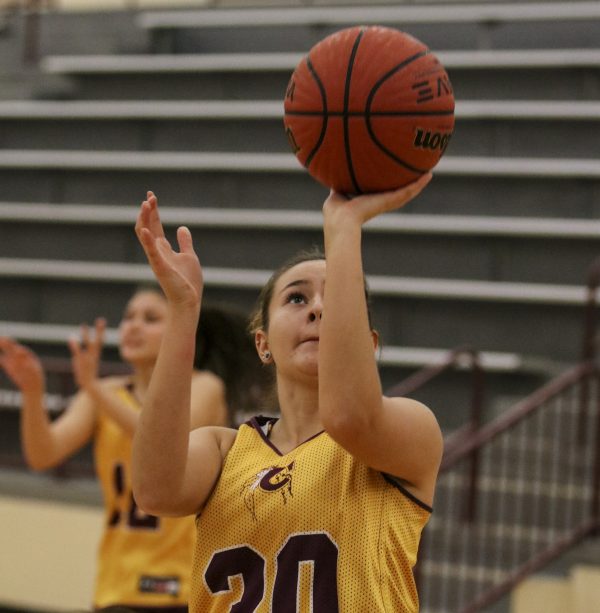 CONCENTRATION: Tori Teesateskie, junior, is all business during a layup drill in a practice at the Charles George Memorial Arena on the afternoon of Wednesday, Nov. 15.

Coach Mintz said that success isn’t really discussed with the new players, but he noted it is implied.  “They know coming up from middle school what is expected of them and how hard it is going to be and that we don’t accept mediocre play and that all the girls before them have done the right thing and have been very successful for doing it.  If they want to be that team, then they have to do it too.”

When asked what goals this year’s squad has set, Coach Mintz commented, “Really, our goal each year is to win a state championship.  Realistically, it’s not going to happen every year.  Most years it doesn’t happen, but that’s our goal and I feel if we have anything less than that as a goal then I feel that I’m selling them short.  We work hard to try to be the best team in the state, and we feel like we’re on the level with the best team in the state usually every year.”

Raylen Bark, a sophomore, got a lot of playing time last year as a freshman, and she’s looking forward to a successful season.  “I think we’ll be pretty good with the team we’ve got.  We don’t have height, like always, but we do have speed so we’re hoping to run all of our opponents and be in shape this season and get the ball up and down the court.”

She added, “We just need to play together, not let drama get in the way, and just really be a team out there and just understand that you can’t play basketball with just one person.  It requires a team effort and everyone putting in hard work to reach all of our goals together.”

Tori Teesateskie, a junior, is coming back for her third year of varsity ball and is ready for this season.  “I think, as a team, that we’ll be better than we were.  I think we’ll play as one, and I think we’ll be very strong this year.”

She puts in a lot of work in the off-season playing with different teams and constantly training to improve her game.  All of that extra work has paid off.  “It has helped me to become mentally stronger and faster.  I think you realize, as you get older, that it’s not just about one person and you have to play as a team.  You have to have good communication, and you can’t have anything get in the way.” 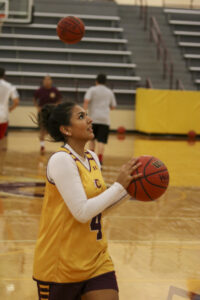 QUICKNESS: Carla Wolfe, junior, does a layup after catching a pass during a drill on Wednesday, Nov. 15. This year’s Lady Braves team, while not tall, is concentrating on speed, quickness, and precision.

This year’s Lady Braves squad has two seniors, Timiyah Brown and Shelby Wolfe, both of whom have had extensive playing time in the past few seasons and are ready to assume their leadership role.

“This year, we’re going to be really good because everyone gets along,” said Brown.  “We’re going to go really far especially if we stay the way we are and stay close.”

On being a leader on the team, she noted, “I’m just going to try to encourage everybody and not let anybody get down on themselves and be there for them whenever I can and be a leader on and off the court…we’ve all been there, we’ve all been freshmen and know how hard it is and moving up to varsity as a freshman is hard enough as it is.  I’m just going to encourage them to be positive all the time and not get down.”

Wolfe commented, “I think we’re a lot closer this year.  All of us know each other now.”

She added, “Being a senior, I don’t feel like I should mess up because they are looking up to me.”

Wolfe has played in some big games the past few years, and going forward into the season, she said she’ll encourage her teammates, especially the younger ones, to keep perspective.  “Just play, it’s a game.  Don’t get nervous and just play their game.”

If there was one quote to sum up this year’s team, it came from Brown who said emphatically, “We’re going to state.”