She doesn’t start officially until January, but she was at the school on Tuesday, Nov. 14 doing a dance workshop with some of the students.  “Today, I just got to know the kids and introduced them to dance and what dance can give to anybody.  I told that I’m not looking for the best dancer in the class, but I am looking for your best effort.”

Whitehead related that dance is special in its message.  “It can transform your body to say something.  I addressed a lot about posture and body language and gave them some movements across the floor and fun wedding-style dance movements just to get them feeling free and not intimidated…we were just getting them more consciously aware of their body and what they can do and are capable of doing.” 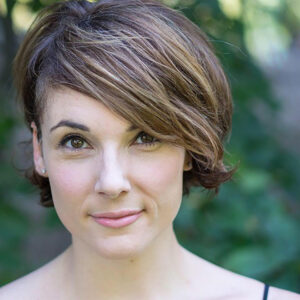 INSTRUCTOR: Chryssie Whitehead, a veteran performer with Broadway and television credits to her name, is the new dance instructor at Cherokee High School. She starts in her new position in January. (Photo by Zusha Goldin)

Michael Yanette, Cherokee High School and Middle School director of choir and musical theater, commented, “It was really quite remarkable because when I got there in the morning there were some kids who were a little nervous, a little ‘deer in the headlights’ looking.  Then, I had a class I had to go teach, and when I came back there was this unbelievable, shining energy coming out of every one of those kids when I came back in the room an hour later.  It was pretty awesome.  There was such a relaxed quality about their presence.  It was amazing.”

If you watch TV or Broadway, chances are you’ve seen Whitehead.  She just finished a Broadway run of “Chicago” where she played Kitty, and she’s performed in the Broadway revival of “A Chorus Line” as well as Lincoln Center’s “Company” where she co-starred with Neil Patrick Harris.  Her television credits include: “Grey’s Anatomy”, “Castle”, “The Mentalist”, “Private Practice”, “Warehouse 13”, “Grimm”, and ABC Family’s TV movie “Revenge of the Bridesmaids”.

Even though Whitehead has been incredibly active in her career, she has always found time to instruct others.  “I have taught all throughout my career…I’ve been teaching hard core since 2005 in between my careers, and that’s what’s kept me sane.”

With her students, she doesn’t hide the fact of her impressive resume’, but she doesn’t brag either.    “I didn’t really focus on the things that I’ve done because it can be intimidating…I want to be on their level.”

An alumni and faculty member of the AMDA (American Musical Dramatic Academy), teaching the arts is a passion for Whitehead.  “Growing up in the arts and being in the arts and pursuing a career in the arts got me out to see the world and meet new cultures and new friends and make great relationships.”

In her position with AMDA, she judges for the school and can recruit and help with scholarships.  “If I see students, especially in high school, that we feel that they need to do this, I’m going to be the one to catapult that.”

She encourages everyone to study musical theater. “To be able to be brave and to stand up and sing and talk and not be afraid helps in any field whether it be a doctor, a teacher, etc.”

Whitehead commented on her new position, “I love it.  I’m so thrilled to be here.”

The Cherokee Musical Theater program will present “Shrek: The Musical” from May 10-13 at the Chief Joyce Dugan Cultural Arts Center, and Whitehead will be instrumental in working with the production.

“I am thrilled to open these kid’s eyes to what the arts can do for them, as a person, in life and how much fun it can be to find the joy in expressing themselves through movement, through voice, through acting,” she said.  “I can’t imagine my life without the arts, and I’m so glad I get to be a part of introducing it to a new group of people.”