If you love musical theater and performances of monologues but don’t have the patience to sit through an entire performance, the Cherokee Musical Theater program has an event for you.  The students will put on the second annual “Short Attention Span Theater”, including acting and musical snippets from various Broadway shows, on Thursday, Nov. 30 at 7pm at the Chief Joyce Dugan Cultural Arts Center. 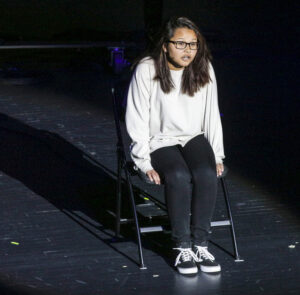 “It’s really an opportunity for our kids to spread their wings a little bit with acting beyond just doing the shows,” said Michael Yannette, Cherokee High School and Middle School director of choir and musical theater.  “The kids really auditioned with these pieces for ‘Shrek’.  So, it’s kind of like a way for them to up their game to do monologues for the first time and to require that if they really wanted to be one of the leads in ‘Shrek’ that they prepare a monologue and prepare a song.”

He continued, “This gives them an outlet to be able to showcase what they did in order to prepare for the audition.  It’s going to be really varied.  We have classical theater all the way up to contemporary stuff, and it’s the first time that our new middle school chorus will sing which is great.  We have 42 kids in that group now.”

Also that evening, the Cherokee Chamber Singers, who are slated to perform at Carnegie Hall in March 2018, will sing a few songs from the Broadway hit “Dear Evan Hansen”.

The doors open for the Nov. 30 show at 6pm, and tickets will be available at the door for $5.

The Cherokee Musical Theater program will present their third-ever musical performance with a May 10-13, 2018 run of “Shrek: The Musical”.  More detailed information, such as ticket prices, will be reported for this show at a later date.