On Veteran’s Day, Cherokee honors those who served 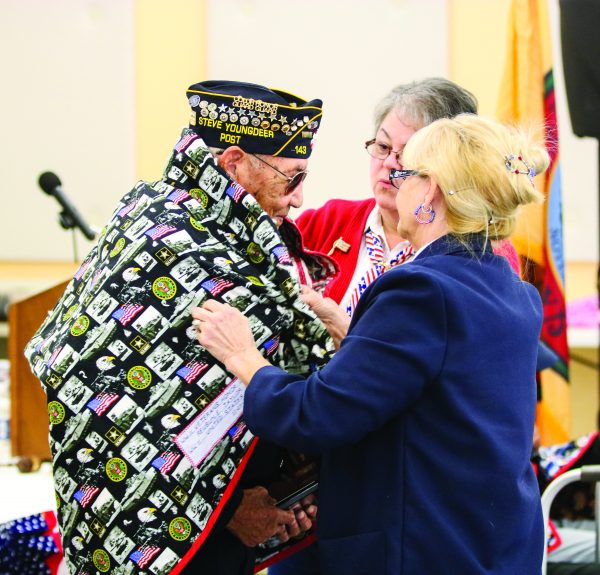 FINEST GENERATION: Reuben Taylor, a World War II veteran who participated in the Battle of the Bulge, is presented with a Quilt of Honor during a Veteran’s Day event held Saturday, Nov. 11 at the Yellowhill Activity Center. Taylor, who served in the 504th Parachute Infantry Regiment, 82nd Airborne Division, was honored along with seven other surviving World War II veterans. (SCOTT MCKIE B.P./One Feather photos)

The Cherokee community honored those who have served in the United State military during a special event held on Saturday, Nov. 11 at the Yellowhill Activity Center.  Hosted by the Steve Youngdeer American Legion Post 143, the event honored veterans of each branch of the military.

“The fact that you are here today acknowledges your appreciation of their service and their sacrifice,” Lew Harding, Post 143 commander, told the crowd during opening remarks.

“Our nation has come full circle,” he said.  “Today, we are engaged again in a seemingly endless war with an unknown outcome.  Again, we are asking our brave young men and women to fight and die, and again they will sacrifice their lives so that we might be free.  Let us always cherish the freedom with which we have been blessed and that they paid such a high price.”

Commander Harding went on to say, “We cannot change our world without changing ourselves; any veteran will tell you that.  The real message today, on Veteran’s Day, is tolerance, compassion, forgiveness, and love.  There is no one way to the mountaintop.  There are many.”

Each was presented with a special plaque and a Quilt of Honor specially made by Victoria Harlan.

“It isn’t often that someone has the privilege of standing in front of a room full of heroes,” Principal Chief Richard G. Sneed, a U.S. Marine Corps veteran, said during his keynote address. 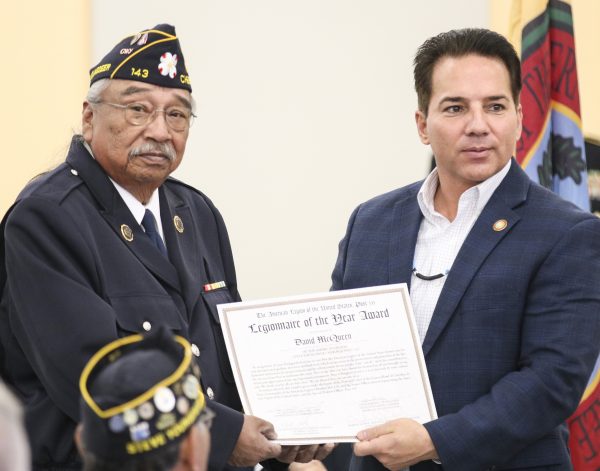 During the week prior to Saturday’s event, Chief Sneed visited Camp Lejeune, a Marine Corps camp in Jacksonville, NC, to talk at a Native American Heritage Month event.  “I had the privilege of speaking about the proud history of Cherokee people in serving our country.  All the way back from the Revolutionary War, through the Civil War, countless skirmishes in between; World War I, at a time when our people were not even citizens, Cherokees fought to protect this country.  World War II – I was able to speak of the heroes that you see sitting before you.  I was able to speak of the gallantry of Principal Chief Robert S. Youngdeer who was at Guadalcanal and a Purple Heart recipient.  Jerry Wolfe was present at D-Day and was also present at the signing of the surrender of the Japanese in World War II.”

He added, “We have a proud and storied history from our heroes who gave their lives in Vietnam and Korea and in Desert Storm and to the current war on terror that continues seemingly without end.”

Chief Sneed went on to say, “My grandfather died in World War II in Germany.  My great uncle, my grandmother’s brother, died at sea in the U.S. Navy.  There’s a price to pay for what we enjoy today.  Let us never take it for granted.” 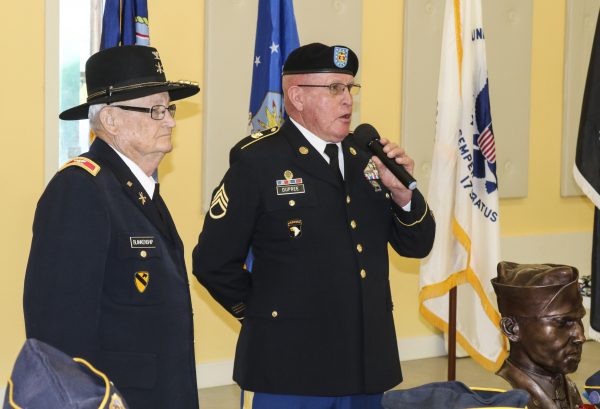 VALOR: Warren Dupree (right), Post 143 service officer, speaks as he presents a bust of Medal of Honor recipient PFC George to Col. Bob Blankenship (Ret.) who serves as the board president for the Museum of the Cherokee Indian.  The bust will be displayed in the Museum lobby along with the original Medal of Honor award bestowed upon George posthumously.

During the event, Warren Dupree, Post 143 service officer, presented a bronze bust of PFC Charles George, Medal of Honor recipient, to Col. Bob Blankenship (Ret.) who serves as the board president of the Museum of the Cherokee Indian.  The bust will be displayed in the front lobby of the Museum along with the original Medal of Honor award given to PFC George.

“It is a very strong tradition of the Cherokee to serve proudly in the uniform of their country,” said Col. Blankenship.  “Charles George displayed the ultimate example of this tradition by being awarded the Medal of Honor for actions on Nov. 30, 1952 near Songnae-Dong, Korea which resulted in the loss of his life.”

Several awards were given by Post 143 during the event including the following:

The event concluded with a musical presentation by Legionnaire Phyllis Shell, of the Big Cove Community, who sang “An Honor to Serve” which was followed by the benediction by Chaplain Charles McCullough.

To view or purchase photos from this event, visit: https://onefeather.smugmug.com/COMMUNITY-and-NEWS-EVENTS/2017-Community-and-News-Events/Veterans-Day-Celebration-11-11-17/