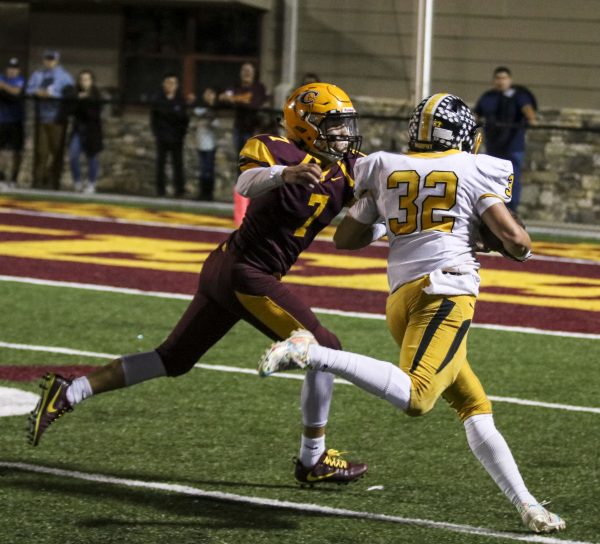 Sometimes football can be a funny sport.  Murphy (9-2) defeated Cherokee (10-1), giving the Braves their first loss of the season, 35-12, at Ray Kinsland Stadium on Friday, Nov. 3.  Earlier in the season, Murphy lost by two points (29-27) to Swain County and Cherokee defeated Swain 45-7.

All three teams shared this year’s Smoky Mountain Conference title, and following Friday’s Cherokee – Murphy game, the three team’s head coaches pulled numbers out of a hat to determine conference ranking going into the playoffs.  Cherokee drew a “1” for the top seed followed by Swain County and Murphy.

Cherokee was led by Tye Mintz, senior quarterback, who completed 10 of 21 passes for 147 yards and carried the ball 12 times for 30 yards.  Isaiah Evans, junior running back, ran the ball 15 times for a tough 139 yards, and he caught four passes for 34 yards.  He got into the end zone twice on the night with an 8-yard run in the third quarter and a 13-yard touchdown reception from Bobby Crowe with 18 seconds left in the contest. 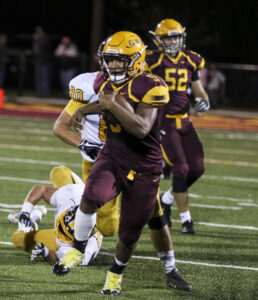 Crowe also led the team defensively with six tackles on the night followed by Holden Straughan and Damian Blanton with 4.5 each.

Murphy was led by Slade McTaggart who carried the ball eight times for 103 yards.  Half of his carries resulted in touchdowns as he scored on runs of 14, 1, 36, and 6 yards respectively.  Kadrian McRae scored on a 6-yard run as well for the Bulldogs.

The first half started out being dominated by both defenses with both teams having two three-and-outs to start.  The first quarter ended scoreless, and it was midway through the second before the first points were put up on the board as McTaggart scored his first.

McTaggart added two in the third and Evans scored his first in the same quarter.  The Bulldogs led 21-6 going into the fourth.

The fourth saw Murphy outscore Cherokee 14-6, the same as the third quarter point differential, to take the 35-12 win.

To view or purchase photos from this game, visit: https://onefeather.smugmug.com/SPORTS/FOOTBALL/BRAVES-FOOTBALL-2017/Vs-Murphy-11-3-17/