Cherokee Indian Hospital said goodbye to Patty Grant, a behavior health consultant who retired with 19 years of service to the Tribe and the hospital, on Oct. 20.

“God has blessed me in so many ways,” Grant said.  “To have this opportunity to work here at home with my own community, I just hope that I didn’t disappoint Him.”

After graduating from Nazarene University in Oklahoma with a bachelors’ of arts degree, she received certification as a substance abuse counselor and returned to Cherokee in 1993 to work at the Unity Treatment Center.  After six years, she received a full scholarship to the School of Social Work at Washington University in St. Louis, Mo., graduating in the spring and started working with the Eastern Band of Cherokee Indians in 2001. 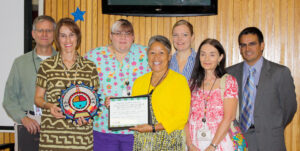 Grant remembers when Analenisgi was located in a small wing at the Tsali Care Center with a staff of 17, and she watched how the program services had expanded and saw how mental health and substance abuse gained significance within the Tribe. “I’ve always believed that the Analenisgi staff and services are heads and shoulders above other mental health programs in the state and even in Indian Country.  We continue to look forward to the Snowbird residential treatment center and other services that are in the works.”

With change also comes new leadership, “I have great faith in Freida Saylor, who just recently became the new clinical director of Behavior Health,” said Grant.  “I know Frieda has worked hard growing up in this community. She continued to set her goals and followed her dreams to realization and that is empowering for others.”

Grant also gives credit to Doug Trantham and his staff for coming on board when they did to help build and develop program services, which she calls a dream come true for the Tribe.

“I want to say thank you to Dr. Michael Toedt, Vickie Bradley, Susan Leadingfox, Casey Cooper and others who have been instrumental in my professional success. I am thankful for them and their support was very important to me,” she said.  “Thank you to Tribal Council and the CIH Governing Board for putting substance abuse and mental health as a priority. It has been such a long needed service and I cannot thank them enough.”

Reflecting back on this chapter in her story, Grant offered advice to those who are just starting their career in social work, “One of my former social work professors, Eunice McDowell, once said ‘the better you know yourself, the better social worker you’ll be.’ I took that to mean if we have not resolved issues in our own lives it will be difficult for us to be effective with those we work with.”

Looking toward the future, her plans include spending time with her husband.  “We are going to fishing first,” she said with smile, “and, then hopefully we can do some traveling.”