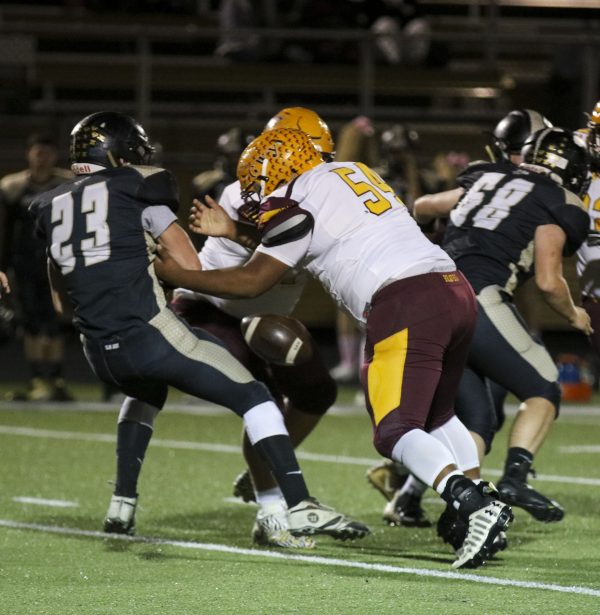 POP: Cherokee’s Zak Perez (#54), senior defensive lineman, puts a big hit on Hayesville’s Tyler Swanger (#23), junior running back, causing a fumble that was recovered by the Braves in a game at Hayesville on the night of Friday, Oct. 27. Cherokee improved to 10-0 on the season with a big 48-14 win. (SCOTT MCKIE B.P./One Feather photos)

HAYESVILLE – Going by the statistics, Cherokee and Hayesville seemingly played a close game, but the scoreboard told quite a different story.  The Braves (10-0) remained unbeaten on the season with a big 48-14 win at Hayesville (2-9) on the evening of Friday, Oct. 27.

With the win, Cherokee took sole possession of first place in the Smoky Mountain Conference.

“We came in here knowing we had to get the job done,” said Kent Briggs, Braves head coach.  “We had a really good week of practice, and our guys were really focused and they played like that the whole game.  We do have a big one next week, but we took care of business today and that’s what we had to do first.”

The Braves had some players back in the roster after sustaining injuries in the past few weeks.  “Our team needs everybody.  We had a couple of people banged up tonight, but hopefully they’re going to be ok.  We need to be at our best going into this last stretch to finish off the conference championship and then the playoffs.  Being healthy today was very good for us.  We’ve just got to stay healthy and keep playing hard.”

Cherokee had 368 total yards and Hayesville had 281.  The time of possession was almost identical (Cherokee 24:25, Hayesville 23:25), each had three punts, and penalties were also close (Cherokee – six for 55 yds, Hayesville seven for 80 yds). 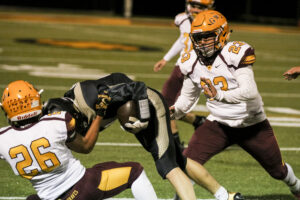 Jaden Welch led Cherokee with four tackles followed by Cecil Walkingstick with 3.5 and Will Davis with three.

The Braves got going quickly in this contest scoring four times in the first quarter alone.  Evans ran for two 3-yard touchdowns and Mintz ran for a 7-yard and a 1-yard score to give Cherokee a 28-0 lead after the first 12 minutes. 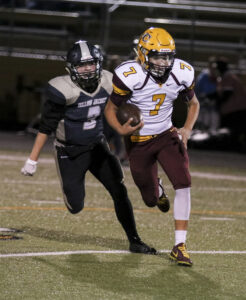 PICK: Cherokee’s Bobby Crowe (#7), sophomore defensive back, runs after intercepting a pass in the second half.

The Braves led 48-7 at the half.  Due to the point differential, the clock ran continuously  in the second half per NCHSAA mercy rules.

The Yellowjackets added one more score early in the fourth quarter as Colton Thomas ran for a 2-yard touchdown to make the final 48-14.

Cherokee is back at home on Friday, Nov. 3 as they host the Murphy Bulldogs (8-2).  A win by Cherokee clinches the conference championship.