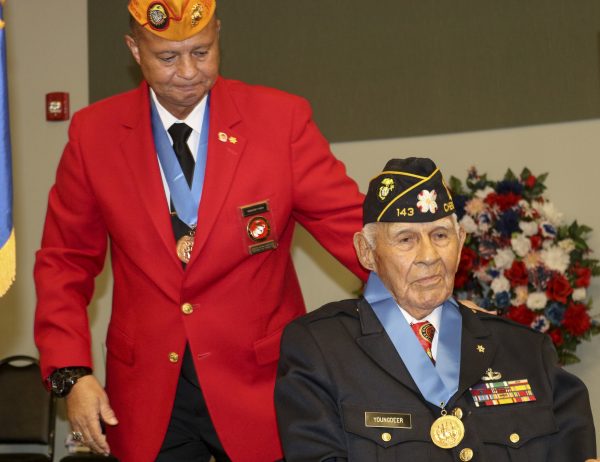 Presidents Harry Truman, Dwight Eisenhower, and Ronald Reagan have all been honored by The Four Chaplains Memorial Foundation.  Now, former Principal Chief Robert S. Youngdeer’s name has been added to that distinguished list as he was awarded a Chapel of the Four Chaplains Legion of Honor Bronze Medallion during a ceremony at the Steve Youngdeer American Legion Post 143 headquarters on Saturday, Oct. 28.

Chief Youngdeer served in the U.S. Marine Corps in World War II.  He was wounded at Guadalcanal for which he received the Purple Heart.

Gregory Hunt, Marine Corps League Foundation president and himself a recipient of the Bronze Medallion, presented Chief Youngdeer with the award on Saturday.

Information from the Four Chaplains Memorial Foundation states, “The Legion of Honor Bronze Medallion is the second highest award and is granted for extraordinary contributions to the well-being of others at the national or world level, to world peace, or to inter-faith and inter-ethnic understanding.”

The Chapel itself is now located at 1201 Constitution Avenue in Philadelphia, the site of a World War II Navy chapel.

Hunt gave a brief history of the Chapel of the Four Chaplains and told of the U.S.A.T. Dorchester being hit by a torpedo off the coast of Greenland in 1943.  “As the ship was going down, four chaplains of different denominations, a Catholic, a Rabbi, and two Protestants, were on board the ship.  As the ship was going down, they made sure that everybody was able to get into lifeboats.  In that process of evacuating the ship, the chaplains made sure that everybody got life jackets – even to the point to where they took their life jackets off and gave them to those that didn’t have one.”

Hunt added, “This is an example that we, as service members, give our brothers if it’s the last we have.” 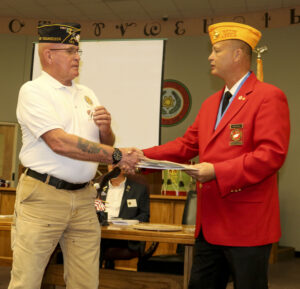 SERVICE: Hunt presents Warren Dupree, Post 143 service officer, with a Legion of Honor award consisting of a pin and certificate.

Only six Bronze Medallions are presented annually, and each recipient is nominated by a member of the Chapel.

Also during the event, Warren Dupree was honored with the Chapel of the Four Chaplains Legion of Honor Award consisting of a gold pin and certificate.  “I am not worthy,” said Dupree after being surprised with the award.  “What we do as veterans is from our hearts.  We expect nothing in return, but I am honored beyond all.”