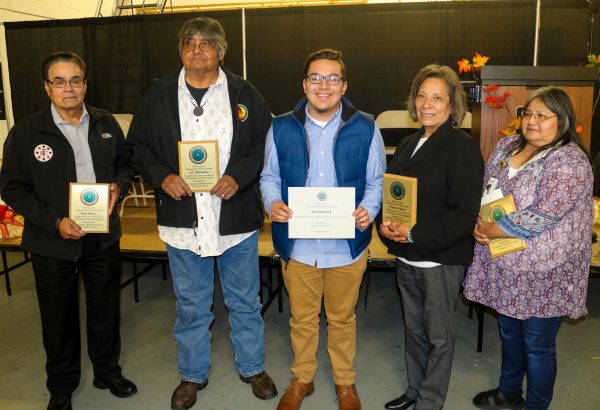 The event was hosted by the Junaluska Leadership Council (JLC) representing EBCI students from area high schools including: Cherokee, Swain County, Robbinsville, and Smoky Mountain.  Each school nominated an elder to be honored whom they, in turn, interviewed to learn more about their life.

Wachacha, a fluent Cherokee speaker, has given much of his time in recent years helping to preserve the language through work with the New Kituwah Academy and the Cherokee Speakers Consortium.  An avid fisherman and gardener, his advice to the youth was, “You can be whatever you want to be.”

Maney, a former teacher, told the students to seek as much education as they could.  She enjoys traveling, sewing, and canning and gave this advice to the students, “Your elders have much to share, and there is a lot to be learned from them.  They have knowledge that you can’t learn from a book.”

McCoy served on Tribal Council for 27 years including 18 of those years as chairman.  He was instrumental in the development of gaming for the Tribe as well as helping to develop the Tribal Education & Training program.  An avid hunter and traveler, his advice to the youth was to “stay away from drugs and focus solely on their education.”

Ward, a fluent Cherokee speaker, teaches the language at Cherokee Elementary School.  She enjoys singing, reading, and occasionally doing beadwork.  Ward told the students to always reach for their goals and dreams and, “Always do your best in school, never take short cuts.”

Following the presentation of the Distinguished Citizen awards, Zane Wachacha, a JLC alumni, was given the Cristyn Jones Youth Leadership Award in honor of Jones, a former JLC member who passed away in 2011.  He currently attends Warren Wilson College where he is majoring in history and political science.  Some of his accomplishments include: owning his own business (Grasshopper Lawn Service), representing the Tribe on the Remember the Removal bike ride, being a member of the JLC all four years he was in high school, as well as numerous academic and athletic awards.

“This award really means a lot to me because I knew Cristyn personally,” said Zane Wachacha.  “She was one of those people who comes around once in a lifetime.  She was a person who gave back to the community.  She put others before herself.  She was a family-oriented person.”

The Cherokee High School JROTC Color Guard presented and retired the colors for the event.  Three groups provided entertainment prior to the event starting including: the Cherokee Chamber Singers, Aniyvwiyahi Analsgisgi (a traditional dance group), and the Welch Family Singers from the Snowbird Community.

To view or purchase photos from this event, visit: https://onefeather.smugmug.com/COMMUNITY-and-NEWS-EVENTS/2017-Community-and-News-Events/18th-Annual-Ned-Long-Day-10-25-17/