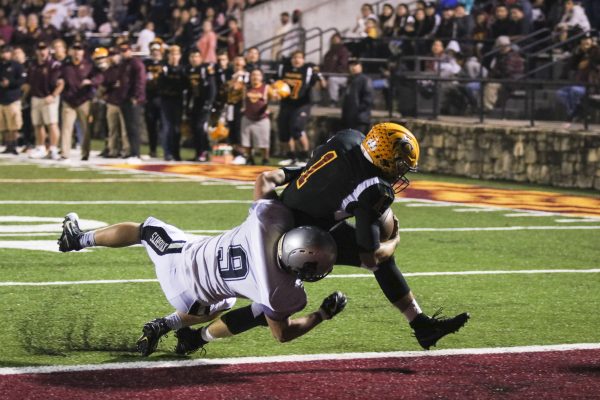 ON THE BOARD: Tye Mintz (#1), Braves senior quarterback, drags Robbinsville’s Austin Lovin (#9) into the end zone for a touchdown in the first half of a game at Ray Kinsland Stadium on Friday, Oct. 20. (SCOTT MCKIE B.P./One Feather photos)

On paper, the offensive output by Cherokee and Robbinsville was just about identical.  In fact, the Black Knights edged Cherokee in total offense 268 yards to 263.  But, the difference in the ball game was scoring output as the Braves got into the end zone three times and the Black Knights didn’t get there all night.

Cherokee improved to 9-0 with an 18-9 victory over Robbinsville (6-3) at Ray Kinsland Stadium on Friday, Oct. 20.  On the same night, Swain Co. bested Murphy 29-27 to put Cherokee in sole possession of first place in the Smoky Mountain Conference with two regular season games left.

“I thought they played very gutsy,” Kent Briggs, Braves head coach, said of his team after the game.  “That’s a good football that Robbinsville has.  They’d only lost two games, and they lost to two very good teams.  They’re very seasoned.  They’re very hard-nosed, and we knew it would be this kind of battle.  We knew it was going to be a knock-down, drag-out and we’d have to play that kind of game, and we did.”

He added, “I’m really proud of our guys that we stood the pressure that was put on us, and we came out with a victory.”

Coach Briggs was especially happy with his defense who held the Black Knights to three field goals on the night.  “The defense played tremendous.  They had their backs against the wall, and they kept fighting.  I think our defensive game plan was excellent, and our guys played hard and rose to the occasion when they needed to.  I am very proud of our entire football team, and I’m very, very proud of our defense.” 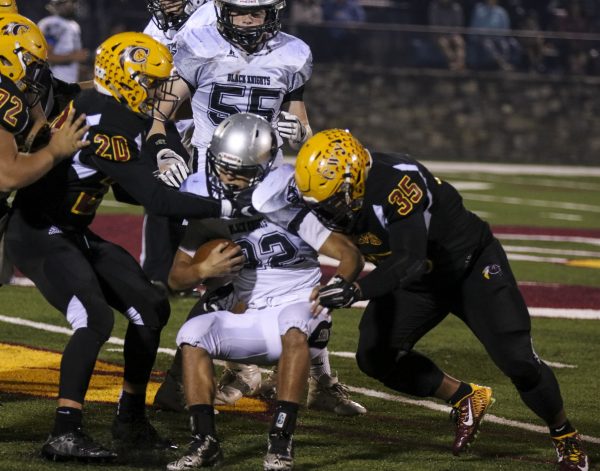 DEFENSE: Cherokee’s Holden Straughan (#20) and Joaquin Layno (#35) combine on a tackle of Robbinsville running back Rylee Anderson. Straughan led the Braves with nine tackles on the night.

Tye Mintz, senior quarterback, led Cherokee on the offensive side of the ball.  He completed 9 of 15 passes for 143 yards and two touchdowns, and he carried the ball 15 times for 90 yards and a touchdown.

Alex Bridges, Black Knights senior quarterback, completed 8 of 27 passes for 97 yards.  Rylee Anderson, sophomore running back, was their workhorse on the night carrying the ball 30 times for 132 yards.

The Braves started the game with a three-and-out.  Following the punt, the Black Knights started at their own 32-yard line and put together an 11-play drive that culminated in the first of three field goals on the night by Freddie Romero. 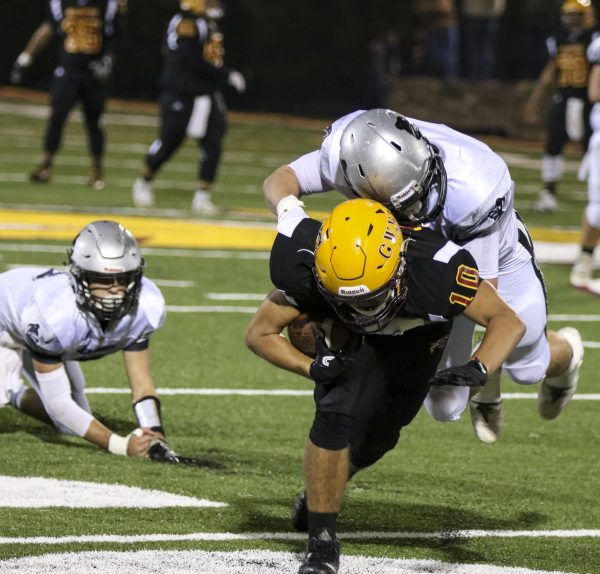 RUNNING TOUGH: Cade Mintz (#10), Braves sophomore wide receiver, breaks one tackle and carries a Robbinsville player on his back for a good gain. On the night, Mintz caught 5 passes for 96 yards and one touchdown.

Cherokee got things going on their next possession.  Starting on their own 30-yard line, the Braves put together a 9-play drive with Tye Mintz capping it off with a 9-yard touchdown run.  The point-after kick failed, and Cherokee led 6-3 with 9:49 left before the half.

But, Cherokee wasn’t done.  They drove down the field, and Tye Mintz hit Santa Maria on a 10-yard touchdown pass with 7 seconds left in the half.  The point-after kick failed, and Cherokee led 12-6 at the half.

The third quarter was dominated by the defenses.  The only score in that 12 minute-span was by Romero who closed the gap with a 27-yard field goal.

Going into the fourth quarter, Cherokee held a slight 12-9 lead.

Just a few minutes into the final quarter, Robbinsville attempted a 42-yard field goal that was no good.  Starting at their own 20-yard line following the missed attempt, Cherokee drove 80 yards on eight plays.  Tye Mintz hit Cade Mintz on a 30-yard touchdown pass to seal the deal .  The point-after kick failed, but Cherokee led 18-9 which is how the contest would end.

Cherokee travels to Hayesville on Friday, Oct. 27, and Coach Briggs is stressing to his team the importance of all games from this point on.  “It counts the same as this game, the same as the Swain game and all the rest of them, so we have to take it the same way.  We’ll enjoy this victory here for a day or two.  But, come Monday, we’ll have to get ourselves ready for Hayesville.  We’re going there, and we can’t be looking ahead.”