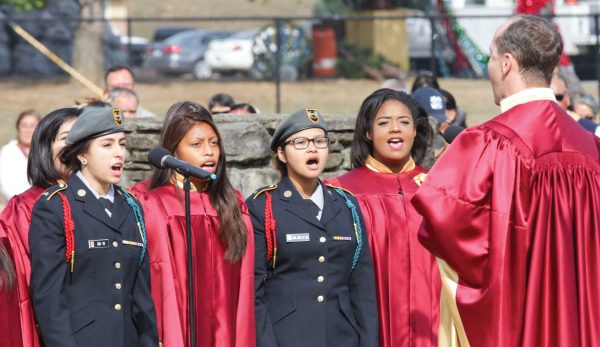 Since 1891, thousands of the world’s best singers and musicians have performed at famed Carnegie Hall in New York City.  Next spring, 26 members of the Cherokee (Central Schools) Chamber Singers will join those ranks.

The Cherokee Chamber Singers will perform six or seven pieces at the venue in March 2018 as part of WorldStride’s Festival at Carnegie Hall: National Youth Choir.

“The kids have done so well at the theater part, but I wanted this year for it to be about really lifting the kid’s musicianship so they were really singing well, singing musically, reading notes, and learning a deeper sense of what it means to sing in a choir.” said Michael Yannette, Cherokee High School and Middle School director of choir and musical theater.  “When we started this year, the theme was this is our year to really achieve a different level of musicianship.  So, this was kind of a way for me to make there a reason why.”

He said the improvement is already showing and showed in their two-piece audition tape they submitted to be selected to perform at Carnegie.  “We wouldn’t have gotten this with the same audition that we did for Disney last year.  There was a certain level there and that was great that they did that, but this was setting the bar higher.”

The general idea to audition for the Festival came when Yannette heard that Dr. Andre’ Thomas, Florida State University professor of music, would be one of the conductors.  A graduate of Florida State himself, Yannette commented, “Andre’ Thomas is a world famous conductor.”

Yannette said the entire theme of this school year has been centered around ‘excellence’.  “We’ve just had a different year.  We have had an incredible ‘hit the ground running year’.  There’s just been no turning back.  Last year, they had such amazing things happen that they were ready.  They’ve just been incredible.”

He said the amount of time the students have put into this year and their audition for Carnegie is commendable.  “These kids came not only after school…they came during Fair Week!  And, another day, they were here for five hours rehearsing for this thing.”

Yannette said after seeing the amount of work the students were putting in, he felt they had already won regardless of the outcome of their audition.  “I was so proud of them.”

But, they did win and were selected.

He said the trip will be nice, but at the end of the day, it is all about the music and improving the student’s musicianship.  “It’s great that we’re going to see New York and everything, but for me it means six or seven pieces that we’re working on to build that excellence.”

The exact itinerary hasn’t been worked up yet, but Yannette did relate, “It is my wish for them that they get to see three Broadway shows while we are there…hopefully, they’ll get the real New York City experience.”