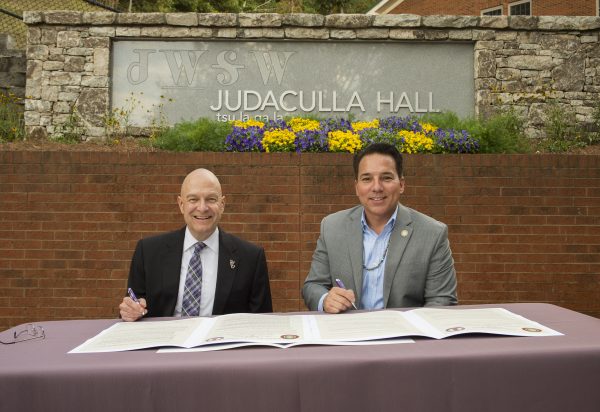 CULLOWHEE – Western Carolina University commemorated its long-lasting relationship with the Eastern Band of Cherokee Indians by affixing a name from Cherokee legend onto a campus housing facility in a ceremony Tuesday, Oct. 10, rededicating the building as Judaculla Hall.

Chancellor David O. Belcher and Principal Chief Richard G. Sneed also signed a memorandum of understanding that calls for additional collaboration between WCU and the Eastern Band and an instructional credit agreement designed to increase the number of Cherokee students enrolled at the university and to strengthen Native American student organizations on campus.

The activities occurred as Western Carolina is in the midst of a yearlong observance of an interdisciplinary learning theme titled “Cherokee: Community. Culture. Connections.” The theme is designed to provide students, faculty, staff and community members with the opportunity to better understand WCU’s relationship with the Eastern Band and to build on it.

During the rededication ceremony, university officials displayed new campus signage proclaiming the name of the building in both the English and Cherokee languages. The 300-bed facility opened in 2004 as Central Drive Hall, a generic moniker given to the building pending the selection of what Belcher characterized as “the perfect name.” 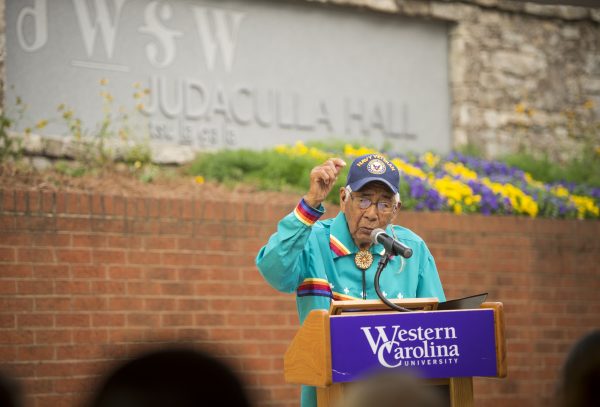 “I have to tell you, it took us a little time to find that perfect name, but we did it. In December of 2016, WCU’s Board of Trustees voted unanimously to rename Central Drive Hall in honor of the unique history and heritage of the Eastern Band of Cherokee Indians. And in February of 2017, the Tribal Council gave the new name a resounding endorsement,” Belcher said.

“Today, it is my honor to dedicate this beautiful residence facility with its new name – Judaculla Hall,” he said. “This is truly a special day. Today, we honor the Eastern Band of the Cherokee Indians.”

Judaculla refers to a great giant who, according to Cherokee legend, resided in the Cullowhee Valley along the Tuckaseigee River. Judaculla Rock, located south of campus, is a large soapstone boulder linked to the Judaculla legend that contains some of the most significant petroglyphs east of the Mississippi River.

Chief Sneed described Judaculla as a “great teacher who taught humans how to live in this place” by teaching them the languages of the birds, forest animals and fish so they could educate people after he left.

“Western Carolina University is built in ‘joolth-cullah-wee’ – or Judaculla’s place, which we’ve shortened to Cullowhee – a seat of higher education in the place of a great teacher,” he said.

The experience of students “in the valley where Judaculla left his mark will provide a solid foundation to improve our community and provide an example for other students to follow,” Chief Sneed said. “It is an honor for me as an educator to celebrate this milestone and join WCU in a new chapter of our alliance toward understanding our past, celebrating our students and providing a better foundation for the education of all of our children.”

Representing the WCU Board of Trustees, Joyce Dugan, former principal chief of the Eastern Band and a WCU alumna, said she was proud of how the Cherokee people took ownership of their own culture and worked with institutions of learning, including Western Carolina, to expand understanding of and appreciation for that culture beyond the Cherokee community.

“The relationship between Western Carolina University and the tribe is long and today is probably the most positive that it has ever been,” Chief Dugan said, thanking Belcher for his leadership. “This naming of Judaculla Hall is an example of the university embracing our historical and present cultural value – I’m not saying ‘values,’ I’m saying ‘value’ – as a people. I am hopeful that the students will educate themselves on this name and that, through their research and their inquisitive natures, they will be inspired to learn more about the Cherokee and to learn more about our history in this place, Cullowhee, this place of learning historically known as Judaculla Place.”

The event included an invocation delivered by EBCI Beloved Man Jerry Wolfe, recipient of an honorary doctorate of humane letters from WCU in May in recognition of his life’s work as a conservator and icon of Cherokee language and culture.

After recognizing the efforts of the family of Jerry Parker in the preservation of Judaculla Rock, Belcher and Chief Sneed closed the proceedings with a flourish of document signings. Through the memorandum of understanding, WCU and the Eastern Band agree to explore opportunities for cultural revitalization and exchanges; promote a climate conducive to enhancing interaction and facilitate recognition of their respective cultures; and develop a long-range plan to fund collaborative projects and activities on education and economic development issues.

Among the goals of the new instructional credit agreement are the reinvigoration of the Digali’i association for Native American students and the recruitment, enrollment and retention of a minimum of 50 students from the Eastern Band of Cherokee Indians.