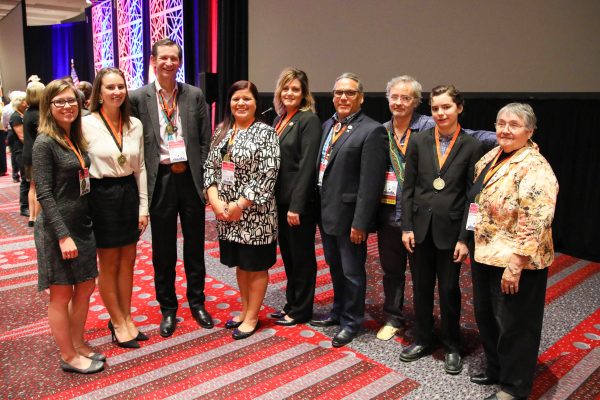 The AISES National Conference has become the premier event for Native American Science, Technology, Engineering and Math (STEM) professionals and students and attracts over 1,800 attendees from across the country.

During the Annual Conference, the Winds of Change magazine featured the Cherokee Preservation Foundation on the first annual list of 25 Native STEM Enterprises To Watch, for the work they are doing to support cultural preservation, language revitalization, and the contributions they continue to make toward programs supporting STEM within the EBCI community.

Jones-Bowman Leadership Award Program Fellows Kayla Johnson and Chloe Blythe, along with Jacobs, received the distinguished honor of becoming lifelong members known as Sequoyah Fellows. AISES Sequoyah Fellows are recognized for their commitment to “mission in STEM and to the American Indian community”.

Johnson attended as the AISES Region 7 Representative saying, “My responsibilities as the Region 7 Representative include communicating information from my regional chapters to the Board of Directors, informing chapters on upcoming events and resources, and organizing the regional conference with a local chapter. AISES offers a community of support from other students in STEM fields, advisors who have been involved in AISES for years, and knowledgeable elders. I hope to inspire youth in our community to become involved in AISES to further pursue education and careers in the STEM field.”

Blythe commented, “I had the opportunity to attend the AISES National Conference and fulfill the cultural component of my leadership plan for the Jones-Bowman Leadership Award program. Before attending, I researched the Cherokee core values so that I would have a better understanding and would be able to participate in an exchange of ideas about traditional values. Learning more about the Navajo Nation and seeing the steps they were taking to incorporate traditional values into curriculum was incredibly eye opening. It helped me to learn, not only about other tribal cultures, but it reinforced my connection to our own values. In addition, it showed me that despite an ever-modernizing world the connection to culture and traditional values are just as important, if not more so, than it ever has been”.