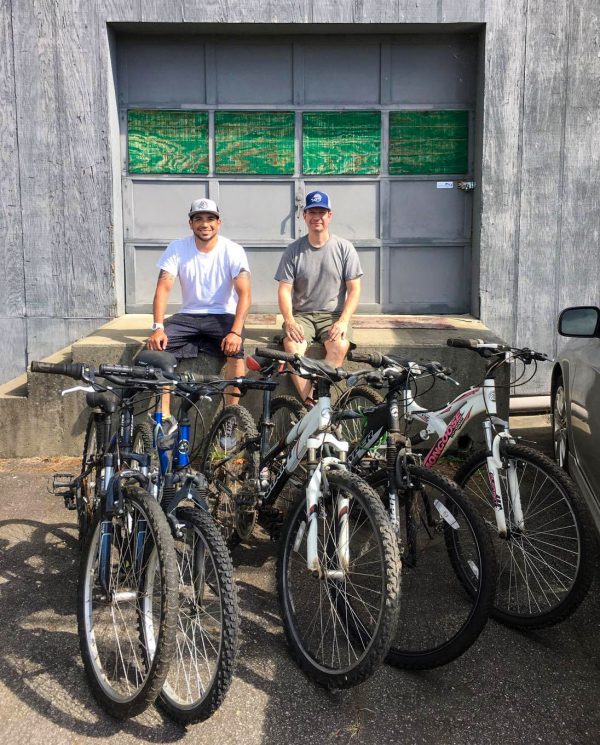 Kallup McCoy II, an EBCI tribal member, is not shy about his past, but he’s optimistic about his future and that of his fellow tribal members, and he’s working hard to make a positive difference.  “I was an addict for 13 years, and I’ve been in sobriety now, recovery, for seven months on Oct. 28.”

McCoy has started the Rez Recovery Riders group, dedicated to fitness and riding bicycles, in an effort to encourage other addicts to try a different path.  “I never really tried to quit,” he said of his own addiction.  “I went to jail this time, and I had the proverbial ‘come to Jesus’ moment…I was saved and  that is what has turned my life around.  If it were up to my will, I would have killed myself a long time ago.  But, six overdoses, and I’m still here.”

He came through his addiction and is working hard to make a difference with others.  “Since I came from that, I figure who best to help an addict but an addict.  That’s what everybody has been saying, ‘if Kallup can do it, we can do it.’  So, I’ve got to stay strong for my people, and it truly breaks my heart to see people walking on the road and they just look so awful…and, that’s how I looked.”

McCoy credits his brother, Jack Smith, with helping him develop the idea for the Riders group.

At the moment, McCoy is training for an upcoming Ironman triathlon in Wilmington.  “After I got sober, one day I said, you know what, the Ironman is the ultimate physical test and mental too.”

He said exercise and sports helps him with his sobriety.  “We’ve got to replace these bad addictions with good ones.”

The correlation between exercise and addiction recovery has been found in several studies.  In a 2012 CNN report entitled “Replacing addiction with a healthy obsession”, Richard Brown, professor of psychiatry and human behavior at Brown University, spoke on a study he helped conduct, “They liked the fact that they were getting healthy and doing something for themselves.”

He also spoke to the idea of replacing one addiction (substances) with another (exercise).  “One of those addictions leads to basically a devastation throughout all aspects of your life and probably premature death.  The other addiction leads to improved cardiovascular health, better self-esteem, better self-efficacy…”

In addition to the Riders group, McCoy is branching out in other ways to help those in recovery.  “My mom, Ruth (McCoy), and I are starting sober living homes in Birdtown.  We hope to have the first one opened up by the end of November.  We’ll have three different houses, four-bedrooms each.”

The idea is still being formulated, but McCoy plans to set that up as a non-profit with a governing board.

McCoy said all of Indian Country is in the same fight with addiction.  “For hundreds of years, we’ve been oppressed by something.  And, now, we’re doing it to ourselves.  We’ve got to break the cycle.  There’re a lot of people now that are doing good including a lot of the people that I used with.  That warms my heart and gives me a lot of hope that we can come out of this.  Because, we’re not giving our kids a chance by doing the things that we’re doing.  We’re not giving them much of a future.”

McCoy said looking down upon those fighting addiction is not helpful.  “I think we need to show true love and support.  That’s the best thing to do.  Most addicts aren’t bad people.  We just make bad decisions because of our disease, and it truly is a disease.”

He said most people have a hard time relating addiction to a disease.  “A lot of people say, ‘it’s not a disease, cancer is a disease.’  Once we get into it and start using drugs, it sets something off in our brain and that’s what it is, a cognitive disease.  It messes up our thinking.   And, that’s what people don’t understand.  You can’t talk to a frog who has lived his whole life in a well about the sea.”

McCoy credits those in his life for giving him support.  “My wife (Ashleigh McCoy) gives me a lot of support.”

While in jail, he asked his cousin if she knew of anyone he could talk to, and she recommended her hairdresser who happened to be Ashleigh McCoy.  “We talked for a little over a month, and I married her the day that I got out of jail because we based our relationship on God…she’s a strong, Christian woman and that’s the best thing to base a marriage off of, and as long as we keep that perspective, we’ll always be ok.”

For more information about the Rez Recovery Riders group or the safe homes in Birdtown, contact Kallup on Facebook: https://www.facebook.com/kallup.mccoyii.3