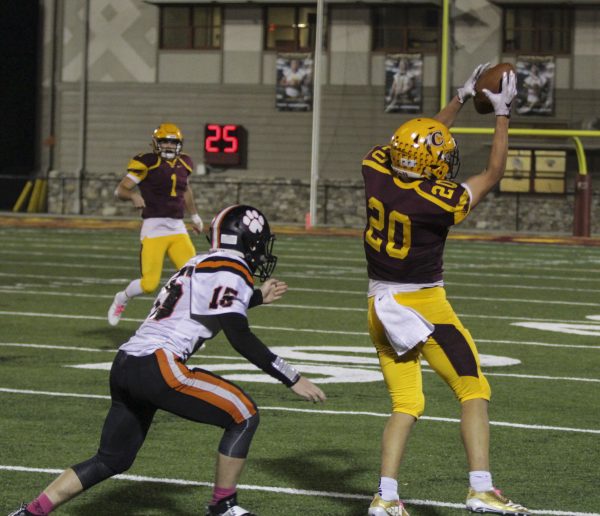 Cherokee scored 20 unanswered points in the second half of Friday’s game to stay unbeaten on the season.  The Braves (7-0) overcame a 2-point halftime deficit to win big over Rosman (2-6) by a score of 39-21 at Ray Kinsland Stadium on Friday, Oct. 6.

“It was not a pretty game, a lot of things were happening, a lot of adversity,” Kent Briggs, Braves head coach, said after the game.  “When you’re in a football game, I don’t care who you’re playing, there’s going to be adversity.  We had some injuries.  We had some things not go our way early, and we had to just stay composed.  You have to give them credit.  Rosman played a really good game, had a really good plan, and they did what they had to do to put themselves in an opportunity to win.”

He said his team stayed focused.  “What we had to do was play our game and execute…some games are harder than others.  Sometimes you just have to think that it’s not going to be a pretty, perfect game; you just have to go out there and win the game.” 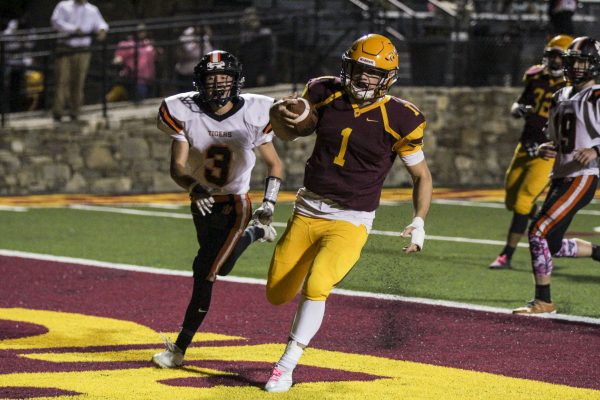 SCORE: Tye Mintz (#1), Braves senior quarterback, runs into the end zone for the final score of the night on a 29 yard run. On the night, he completed 11 of 18 passes for 215 yards and one touchdown, and he rushed the ball 11 times for 122 yards and two touchdowns.

Due to previous injuries and a few during the game, some of Cherokee’s back-ups got some good playing time in this contest.  Bobby Crowe, sophomore back-up quarterback, came on for a few series and completed 3 of 5 passes for 69 yards and two touchdowns.  Terence Ledford ran the ball 17 times for 112 yards and 1 catch for 22 yards and a touchdown.

Coach Briggs spoke highly of Crowe and Ledford, “It was great to see them step up and make some plays when they were needed the most. They played hard and were a great contribution.” 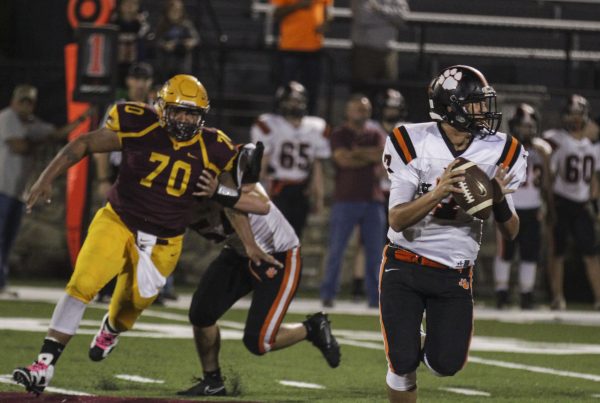 Byron Locust, senior defensive lineman, led Cherokee defensively with 8 tackles and 1 sack followed by Cade Mintz and Will Davis with 5 each.

Rosman was led by Luke Stewart who completed 18 of 29 passes for 207 yards, 2 TD, and 1 INT.  Samuel Chappell was his main target with 5 catches for 110 yards and a touchdown.

Rosman made it a game early and got on the board first as Stewart threw a 23-yard touchdown pass to Deland Thomas.  The point-after kick by Blake Sharpe made it 7-0 just three minutes into the game.

With 8 seconds in the quarter, Crowe threw a 35-yard strike to Cade Mintz.  The extra-point failed, and Cherokee led 13-7 at the end of the first.

Rosman’s next touchdown involved some trickeration as Stewart threw a backwards pass to Thomas who turned and launched a 66-yard bomb to Tre Combs.  The extra point was blocked, and the teams were tied at 13-13 just 11 seconds into the second quarter.

Seven minutes later, Stewart completed a 58-yard touchdown pass to Chappell to put Rosman back on top.  Stewart and Chappell then connected again on the two-point conversion to put the Tigers up 21-13.

Cherokee scored once more before the half as Tye Mintz took off on a 24-yard run for a touchdown with just over two minutes left in the second.  The two-point conversion failed, and the Tigers would take a 21-19 lead into the locker room.

The second half was all Braves.

Cherokee scored 20 unanswered points in the half with one score in the third and two in the fourth.  At the 5:29 mark of the third, Tye Mintz ran 17 yards for the score.  The two-point try failed, and Cherokee led 25-21.

Just two minutes into the fourth quarter, Tye Mintz found Straughan darting down the sideline for a 64-yard touchdown pass.  The point-after kick was good, and Cherokee extended its lead to 32-21.

The Braves added some insurance a few minutes later as Tye Mintz rushed 29 yards for the final score of the game to make the final 39-21.

The Braves travel to Andrews on Friday, Oct. 13.  Coach Briggs said the Wildcats are similar in nature to the Rosman squad.  “They’re hungry, and they’ll play hard, and if we don’t do what we have to do to win the game, they’ll come out there and beat us.  So, we’ve got to play Brave football.  We’ve got some guys injured.  We had some guys injured tonight who had to step up and play injured.  Hopefully, we’ll get some guys back and have our full team out there.”