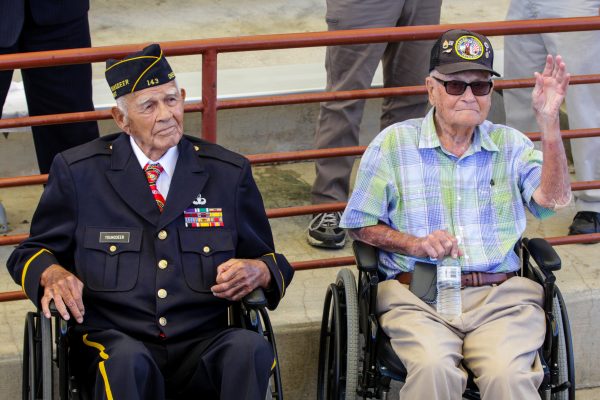 FINEST GENERATION: Former Principal Chief Robert S. Youngdeer (left) and Wayne Carringer, both World War II veterans, were among those recognized and honored during a Veteran’s Honoring Ceremony at the Cherokee Indian Fairgrounds on Friday, Oct. 6. Chief Youngdeer, U.S. Marine Corps, was wounded at Guadalcanal for which he received the Purple Heart, and Carringer, U.S. Army, is one of the last remaining survivors of the Bataan Death March. (SCOTT MCKIE B.P./One Feather photos)

Principal Chief Richard G. Sneed, a U.S. Marine Corps veteran, spoke of service in his opening remarks.  “We use this word as a description and recognition of the duty and the sacrifice an individual enters into when they are a member of the armed forces.  We bestow honor upon those who served in recognition of their high calling.  To serve is in fact the highest calling.  Jesus said, ‘whoever desires to be greatest among you must be a servant to all’.  Servicemen and servicewomen recognize the high calling of serving our country.”

He said all veterans are servants.  “Whether in a time of peace or a time of conflict, we served.  We willingly place on hold our families, our aspirations, our dreams, and in fact, our very lives in order to protect and preserve a more perfect union, to establish justice and ensure domestic tranquility, to provide for the common defense, promote the general welfare, and secure the blessings of liberty…” 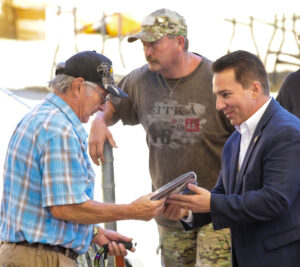 Chief Sneed presented special Certificate of Appreciation plaques to each veteran present.  All five branches of service were represented at Friday’s event.

Several World War II veterans were recognized and honored during the event including Former Principal Chief Robert S. Youngdeer, U.S. Marine Corps; Reuben Taylor, U.S. Army; and Wayne Carringer, U.S. Army.  Chief Youngdeer, a member of the 1st Marine Raider Battalion was wounded at Guadalcanal and received the Purple Heart.  Taylor, a recipient of both the Bronze Star and the Purple Heart, was a member of the 504th Parachute Infantry Regiment, 82nd Airborne Division, and participated in the Battle of the Bulge on Dec. 16, 1944.  Carringer is one of the last remaining survivors of the Bataan Death March. 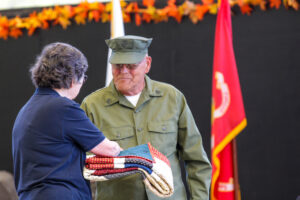 For their service to the Eastern Band of Cherokee Indians over the last few years in presenting Quilts of Valor to veterans, Warren Dupree, Steve Youngdeer American Legion Post 143, presented a check in the amount of $1,000 to the Smoky Mountain Quilters Guild from the Tribe.