Rooted in the Mountains symposium draws on tradition, looks to future 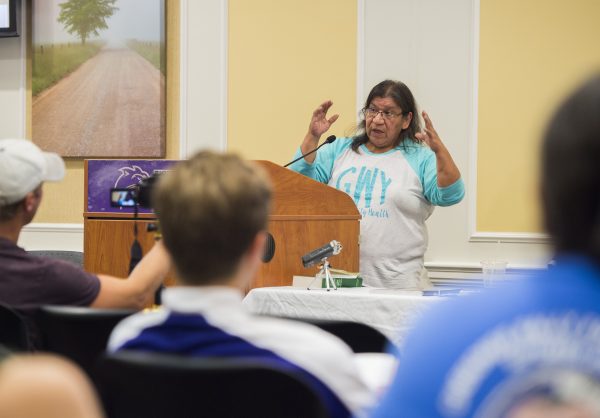 HEALING: Onita Bush, an EBCI tribal elder from the Snowbird Community, speaks at the Rooted in the Mountains symposium on the Cherokee use of plants for health and healing. (WCU photo)

The annual symposium is an interdisciplinary forum where ethnography, literature, art, music and Native and Western science converge. This year’s theme was “duyuk’ dv’ I,” which in its simplest definition translates to “the correct way” in Cherokee, but in actuality can mean much more.

As a verb-centered language, in Cherokee the term “duyuk’ dv’ I” can be used in many instances referring to different perspectives, said Tom Belt, WCU’s Cherokee Language Program coordinator, during the event opening.

“It also can mean the straight way, point A to point B, or if I were to tell you Sylva is three miles away as the crow flies, I would say ‘duyuk’ dv’ I,’” Belt said. “But, I could also use it as a way to describe how one should live life. Not about things we don’t have. ‘Duyuk’ dv’ I’ is to do things in life that matter, that are large, with forethought.”

Belt spoke about differences between Cherokee and Native American concepts and Western concepts, including leadership, community and perception of the natural world. “The concept of conscience of what is true affects the whole world, it affects the world you live in, the world you come from,” he said. “That includes every plant, every stream, everything that we know to be the natural elements of the world and its sustainability.”

Some of the contrasts between cultures involves the value placed on knowledge versus wisdom, Belt said. “I believe that is the theme of these symposiums,” he said. “It is to try to understand why things are the way they are. To fix them, to make them better, to put them back onto that road. To put you back on that path of ‘duyuk’ dv’ I’ and to wisdom.”

Natural healing and nurturing, as well as finding societal understanding, were constant topics at the symposium. “But, this is not just about health and environment and science,” said Lisa Lefler, director of Culturally Based Native Health Programs in WCU’s College of Health and Human Sciences. “This is very multi-disciplinary. This is about what we think about, what we write about, how we are connected in an ever-changing world.”

Onita Bush, an EBCI tribal elder and resident of the Snowbird community, gave a captivating presentation on the Cherokees’ traditional use of ― and reliance on ― plants for medical care. “We didn’t take medicines from a doctor,” she said of growing up in remote Snowbird in Graham County in the 1950s and 1960s. “We didn’t have a doctor. Doctors were far away. The only medicine we got was from plants.”

She described how certain tree bark could aid digestion, a flowering plant could strengthen platelets and teas made from various herbs could relieve headaches, fevers and other ailments. She explained she is now working with drug and alcohol abuse treatment with native plants.

“I got here by listening to what my parents and elders said. They walked the walk before you and know the path,” Bush said.

She was joined by Jim Veteto, WCU associate professor of anthropology and an ethnobiologist, who discussed the southern Appalachians as a bioregion, its tremendous vegetation diversity and ancient medicinal uses and yet undiscovered uses for native plants.

Other highlights of the symposium included a field trip to Kituwah Mound, near Bryson City, which was led by Brett Riggs, WCU’s Sequoyah Distinguished Professor of Cherokee Studies.

The symposium had several distinct parallels with WCU’s 2017-18 interdisciplinary campus learning theme of “Cherokee: Community. Culture. Connections.”  Faculty and students already are engaged in topics and exploring topics related to the learning theme. The goal is to foster campus conversations and connect students with collaborative opportunities for an integrated campuswide experience.

Keynote speaker was Joseph Gone, a University of Michigan professor and expert on American Indian psychology and mental health, whose address was titled “Healing Native Communities through Indigenous Paradigms.” Enrique Gomez, an associate professor of physics and astronomy at the university, spoke on healing through cosmological narratives. Gwyneira Isaac with the Smithsonian Institution discussed the value of traditional knowledge, and Mae Claxton, an associate professor of English at WCU who has served on the event planning committee since the symposium’s inception, welcomed attendees.