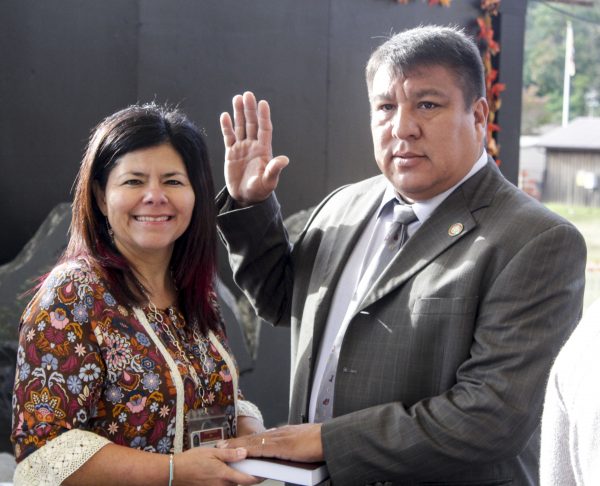 OATH: Tribal Council Vice Chairman David Wolfe, Yellowhill Community, takes the oath of office during an Inauguration held at the Cherokee Indian Fairgrounds on the morning of Monday, Oct. 2 as his wife, Susie, holds the Bible for him.  (SCOTT MCKIE B.P./One Feather photos)

“It’s a great day for our Tribe,” said Principal Chief Richard G. Sneed as he opened the Inauguration on Monday morning.  “For generations, our Cherokee people have come together to choose our leaders, to support one another, and to work to make a better community for all of our people.  As our new Tribal Council takes the oath of office, they will commit to work hard for the betterment of all of our people and to serve our tribal nation in good faith.”

Chief Sneed said the job is not to be taken lightly and oftentimes calls for great sacrifice.  “There will be times when it will not seem like a worthwhile cause, but when you see the faces of the children whose future depends on your commitment, you will find your real strength.” 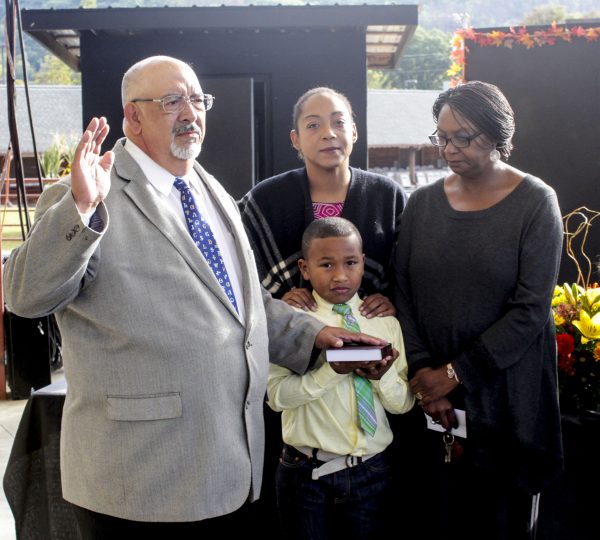 FAMILY: The Tribal Council representatives and School Board representatives who took their oath of office on Monday were surrounded by family and friends. Here, Big Cove Rep. Perry Shell takes his oath as his grandson, Joe Perry, holds the Bible for him.

Chairman Wachacha stated, “I appreciate everyone’s confidence.  It wasn’t a position that I was after at first, but I felt that a lot of my peers up here felt it was time for me to take that step forward.  I know my family backs me.  A lot of people said that it’s time.”

In reflecting on his journey to the Chairman’s seat, he noted, “Everything started with the military, and that’s sort of what I’ll bring here but not to the point that it’s under a drill sergeant hat.  That was a good time in my life, and I appreciate the support.”

He finished with, “I’ll make sure that I represent this Council and this Tribe to the best of my ability.  I’ll control the meetings, that people are heard, but it will be conducted in a respectful manner and a professional manner…at the end of the day, when this chapter closes, either two years from now or ten years from now, I just want to be able to look back at it and say that I done the best I could and hopefully I made you all proud.” 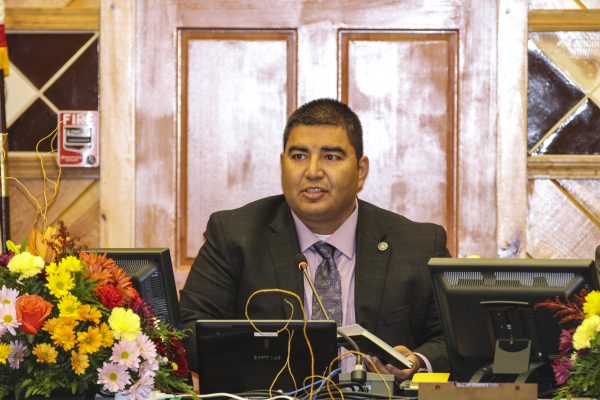 Vice Chairman Wolfe commented, “I would just like to thank the Yellowhill Community for giving me another opportunity to come and serve them.  I appreciate all of the stories that they had to tell and their vision for the future of this Tribe, and it’s coming back together in being one Tribe and treating each other with respect and love and love your neighbor.”

The other nine Tribal Council representatives gave a brief statement during the session.  Here are their comments:

Painttown Rep. Lisa Taylor: “It’s an honor to be elected for Painttown Council.  I want to work for the people and for this Tribe and to try to bring unity back and trust to this Council.  I just appreciate the honor.”

Wolftown Rep. Jeremy Wilson:  “It’s an honor to be up here in front of you.  It’s been a very long process.  I know we’ve all had our challenges that we’ve been dealing with in the campaign, but all the hard work was worth it.  I had a very great time in the campaign connecting with my community and learning from people who’ve served before me.  But, I want everyone here to understand one thing, and that is I am here to work with you, and that’s going to be the case for the next two years.”

Yellowhill Rep. Tom Wahnetah: “First of all, I’d like to thank the Creator for allowing this to happen and second for the Yellowhill Community for having the confidence in me to put me in this seat.  I look forward to working with all of you.  I’m always available, and I’m easy to get along with.”

Birdtown Rep. Boyd Owle: “It’s certainly an honor and a privilege.  I was probably out every afternoon campaigning hard, and I met a lot of really great people in our community, and I certainly look forward to serving ya’ll.”

Big Cove Rep. Perry Shell: “First of all, I look forward to working with the new Council.  There’s a lot of work before us.  We might not always agree, but I pray that the decisions that we come to and resolutions that we come to are for the benefit of all of our people – almost 16,000 of us now…I also request prayer for myself and this Council and the Chief and the Vice Chief and all of the leadership here.  It’s always a challenge, but with that prayer, it does work.”

Big Cove Rep. Richard French: “I want to thank the Big Cove and Tow String Community for having the faith and confidence in me to allow me to sit here for two more years.  Like I said when I came in two years ago, I am a representative for the Big Cove Community, but I am here to serve every enrolled member of this Tribe.  That’s my job.  I’m here for all of you, not just my community…I just want us to work together.  But, most of all, I want us to bring respect and dignity back to these Chambers.  I want us to respect the elders.  I want us to respect all of those people who come in this Chamber and get to that podium.”

The Birdtown Community only had one Tribal Council representative take the oath of office on Monday morning.  Current Birdtown Rep. Albert Rose and candidate Ashley Sessions are involved in a run-off election scheduled for Tuesday, Oct. 10.  To see the official ruling from the EBCI Election Board issuing a run-off election, visit: https://www.theonefeather.com/2017/10/read-election-board-decision-on-birdtown-run-off-election/