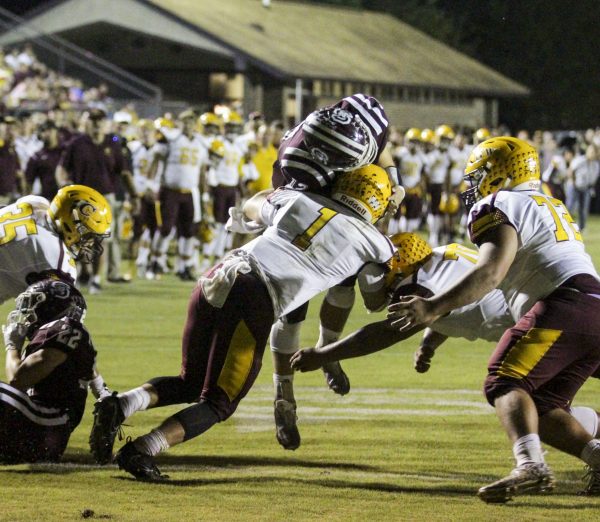 BIG STOP: Cherokee’s Tye Mintz (#1) tackles Swain Co.’s Brodie Bowman (#12) near the goal line as time expires in the first half of a game at Swain Co. on Friday, Sept. 29. The Braves took a 14-7 lead into the locker room and poured 31 points in the second half to beat Swain 45-7 marking the first time since 2008 the Braves have beaten the Maroon Devils. (SCOTT MCKIE B.P./One Feather photos)

BRYSON CITY – Cherokee (6-0) scored 45 unanswered points to top cross-county rival Swain Co. (2-4) on Friday, Sept. 29.  The Braves amassed 542 total yards of offense (10.6 yards per play) while holding the Maroon Devils to 345 on the night.  It was the first time since 2008 that the Braves defeated the Maroon Devils.

Blake Smith, Braves junior wide receiver, caught two passes for 99 yards and one touchdown, and Terence Ledford, junior running back, came into the ball game in the second half and carried the ball 13 times for 96 yards (7.4 yards per carry).

Cherokee was led defensively by Cecil Walkingstick with 5.5 tackles followed by Tye Mintz with 4.5.  Holden Straughan, who had four tackles on the night, Byron Locust, and Chace Andrews all got one tackle for loss.

Brodie Bowman, Swain Co. senior quarterback, led the Maroon Devils with 112 yards rushing on 17 carries, and he completed 6 of 15 passes for 130 yards.

The game started well for Swain Co. as they took the opening kickoff and drove down the field for the first score of the night.  Bowman ran in from one yard out to make it 7-0 at the 7:25 mark of the first quarter.  It would be the only time the Maroon Devils would get into the end zone all night as Cherokee would score six seven touchdowns in a row. 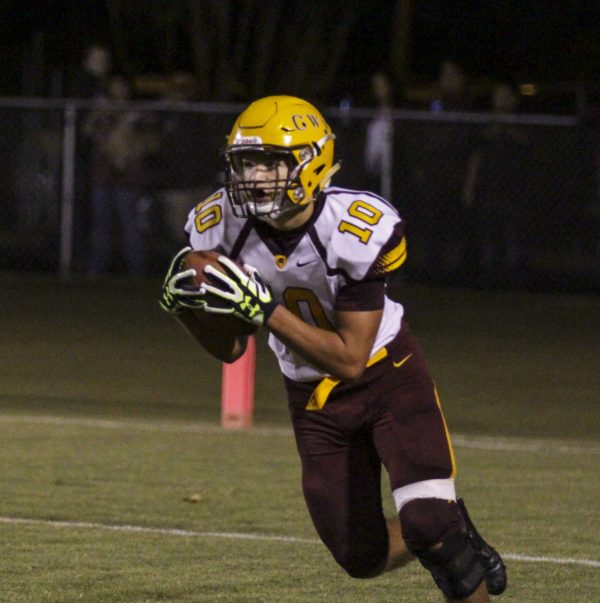 ALL THE WAY: Cade Mintz, Braves sophomore wide receiver, fields the second half opening kickoff on his own 3-yard line. Ninety-seven (97) yards later, he was in the end zone on a touchdown that put the Braves up by two scores early in the third quarter.

Midway through the second quarter, Tye Mintz connected with Cade Mintz on a 14-yard deflected pass in the end zone.  The point after attempt failed, and Cherokee trailed 7-6 with 6:40 left before the half.

The Braves got the ball back and drove down the field culminating in a 13-yard touchdown run by Tye Mintz.  Cherokee converted on the two-point play with Tye Mintz throwing to Cade Mintz, and Cherokee led 14-7.

Swain Co. got the ball back with 52 seconds left before the half and drove deep into Cherokee territory.  With just seconds left in the half, Bowman tried a quarterback run around the right end, but Tye Mintz was there to deliver a big hit and stop him as time expired. 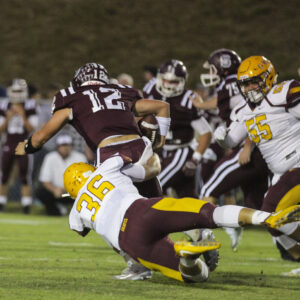 Cade Mintz would break the game wide open on the very first play of the third quarter.  He fielded the kickoff at his own 3-yard line, ran down the left sideline, avoided several Maroon Devils tackles, and sprinted up the field 97 yards for a touchdown.  The point after failed, and Cherokee led 20-7 just 14 seconds into the third quarter.

Cherokee would add three more scores in the third as Tye Mintz threw two long touchdown passes – 89 yards to Blake Smith and 86 yards to Cade Mintz – and ran 28 yards for a third score.  The two-point conversions failed on the first two scores, but Tino Pete hit the point-after after Mintz’s run, and the Braves led 39-7 at the end of the third.

The Braves would add one more score as Mintz ran for a 3-yard touchdown.  The point after failed, and Cherokee led 45-7 which is how the game would end.