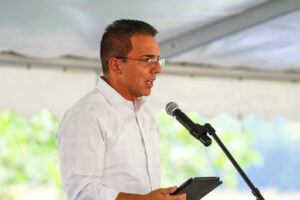 For some time, there have been rumblings of wrongdoing and violations of tribal law within our tribal government.  Consequently, an investigation was initiated by Tribal Council in August of 2016 to address the allegations and concerns brought to my attention by numerous tribal employees. The results of that investigation, released January 18, 2017, were deemed confidential. Later, a redacted copy was released to the public at the direction of Tribal Council.

I feel that it was necessary to respond to the comments, allegations and accusations being directed toward me by the Principal Chief. My reason for doing so is that I believed that by remaining silent and not making a statement for the record, that many people who weren’t as close to the situation like our tribal employees are, might interpret my silence as concurring with the Chief’s remarks.  With all due respect to the Office of Principal Chief, I do not concur. Below you will find my remarks made at Budget Council on Tuesday, February 28, 2017. This is my official statement as the Vice-Chief of the Eastern Band of Cherokee Indians, duly elected by the people.

It has always been my belief that if someone says something about me that is not true, the best possible response is to ignore it…to not even validate it with a response. Since taking office this happens on a fairly regular basis. It just goes with the territory, and it is usually quite easy to ignore what is being said when it is clearly false and often times outlandish.

However, when the highest elected official in our tribe publicly levels allegations against me, both in this chamber and on social media, I feel that it is necessary to at least respond for the record and to tell my side of the story. I do this not because I have anything to defend. I do not.  I make the following statement to simply give a response to all of the allegations being leveled against me.

During last month’s regular session of council and prior there was a great deal of discussion about the findings of the Internal Audit investigation. Those findings led to a 9-3 vote by Tribal Council to begin an impeachment hearing for the Principal Chief.  As you know, it was a very emotionally charged session.  At the end of the session and later on Facebook, the Chief stated that all of this was happening because I am somehow in collusion with tribal council to remove him from office. Nothing could be further from the truth.

I would like to remind everyone that neither I nor Tribal Council generated the findings in the Internal Audit report. The Office of Internal Audit investigated and reported, that is what they do.

To suggest that there is somehow a conspiracy to remove the Chief would have to include not only Tribal Council and myself, but also the office of Internal Audit, the Audit Committee who approved the investigation and findings, and every person who testified in the investigation.

It would also imply that the findings were fabricated, when they are in fact supported through documentation.

It has been alleged that I want to be Chief, and that is why all of this is happening.  If I had wanted to be Chief, I would have run for the office.  I am not so selfish or ambitious a person that I would try to oust another person from office for political gain.  More importantly, I am not so selfish that I would somehow try to orchestrate an impeachment, knowing the anguish that it would cause to everyone involved, to the Principal Chief, his family, myself and my family, and to our entire Tribe. I can assure you, that no one takes even the idea of impeachment lightly.

Finally, it has been alleged that I have violated tribal law and that I too should be impeached.  If a resolution to impeach me is brought before Tribal Council, you have my word that I will not protest it, but will accept whatever consequences may accompany the resolution, up to and including impeachment.  Should a resolution for my impeachment be brought before this governing body, I will welcome the hearing as an opportunity to give an account for any alleged wrongdoing.

I will not divert attention from my actions or point fingers. I will not ask supporters to fill the chamber to defend me. There is no room in this hallowed chamber for conjecture, hearsay or rumors. I will stand and face the charges and accept whatever consequences may come, because that’s what leaders do. They accept responsibility for their actions.

From my perspective, and I cannot speak for anyone else, all of this is about one thing and one thing only, the Internal Audit findings…nothing more, nothing less.

Editor’s Note: This letter was submitted by Vice Chief Sneed. The official video record of the February 28 proceedings as Tribal Council met for Budget Council is available online www.ebci.com. We continue to invite reports from all of our Tribal elected officials.