For the second year in a row, Cherokee has taken home the top post-season honors in girls basketball in the Big Smoky Mountain Conference.  Identical to last season, Pooh King, senior point guard, was named Player of the Year, and Chris Mintz, Lady Braves head coach, was named Coach of the Year.

“It’s always an honor to be acknowledged by your peers,” Coach Mintz commented.  “It’s all because of what our team did and what the girls did that I even got nominated for this award.  So, I give all of the credit to them.”

King, a member of the Seminole Tribe of Florida, has played at Cherokee two seasons where she averaged 15.3 points per game, 5.5 steals, and 4.4 assists. “I’m honored to get it two times in a row, and I just wouldn’t have done it without my team.” 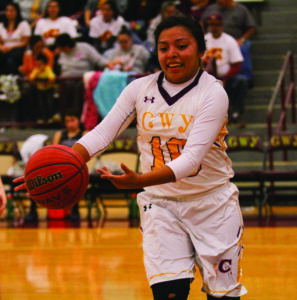 In speaking of her time in Cherokee, she said, “I’ve enjoyed it.  They welcomed me here, and I was just blessed to play with this group of girls.  We’re more like a family than a team, and I just really enjoyed that.”

On King, Coach Mintz noted, “She’s a special player that has given her all for two years here.  She has played really great and been consistent.  I’d put her up against any point guard in western North Carolina, and I think we have the best one.”

For the season, the Lady Braves went 25-3, won the BSMC regular season title, and took second place in the conference tournament.

In addition to King, Tori Teesateskie and Shelby Wolfe were named to the All-Conference team, and Timiyah Brown and Raylen Bark were named Honorable Mention.

The Braves ended the 2016-17 campaign at 19-9.  They took second place in the BSMC regular season, and they won the conference tournament.

Tye Mintz and Holden Straughan were named to the All-Conference team and Sterling Santa-Maria and Josiah Lossiah were named Honorable Mention.

On the boys side, Scotty McMahan, Swain Co., was named Coach of the Year, and Deland Thomas, Rosman, was named Player of the Year.