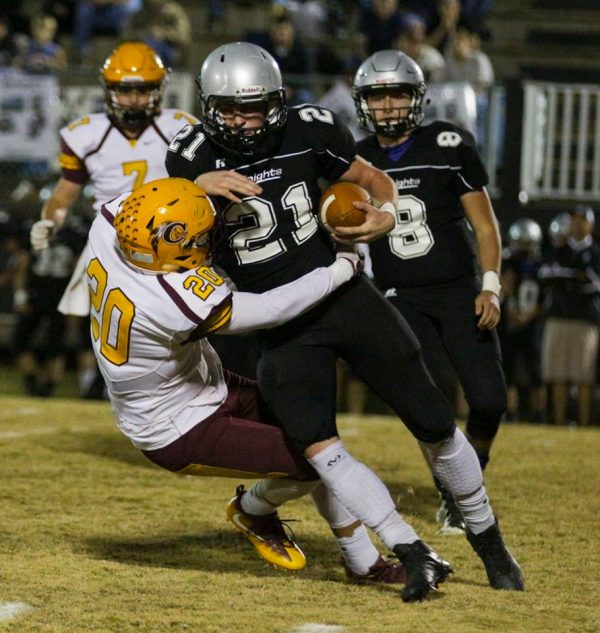 ROBBINSVILLE – After falling behind 18-12 at the end of third quarter, the Cherokee Braves (6-4, 3-2 in Smoky Mountain Conference) roared back with 13 points in the final quarter to topple Robbinsville 25-18.  The Braves were aided in their comeback by a strong defense that held Robbinsville (4-5, 3-2) to just over 200 total offensive yards in the game.

Cherokee’s stiff defense got a key stop at their own 7-yard line with less than a minute to play.  The Braves took over on downs and ran the clock out to secure the win.  Joaquin Layno led the Braves with 15 tackles followed by Holden Straughan with 12.  Tye Mintz and Seth Smith both had 8 tackles each.

Robbinsville’s Elijah Wachacha completed 7 of 14 passes for 81 yards, one touchdown, and one interception, and he rushed the ball seven times for 30 yards.  Chris Hemphill rushed nine times for 53 yards for the Black Knights, and Chandler Jumper caught three passes for 15 yards and one touchdown. 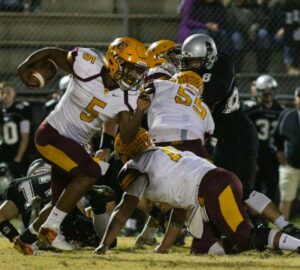 SEALED: Cherokee’s linemen, including Will Davis (#55) seal the inside to spring Isaiah Evans (#5) on a run in the second half. On the night, Evans 19 times for 77 yards and two touchdowns.

The Braves led early in this game.  After slow starts by both teams, Cherokee got a drive going midway through the first that culminated in a 4-yard touchdown run by Evans.  The point-after failed, and the Braves led 6-0 at the 5:05 mark.

Following several possessions by both teams, Cherokee drove down deep into Robbinsville territory, and with 6:12 left before the half, Tye Mintz ran in from the 1-yard line.  The two-point try failed, and Cherokee led 12-0.

Three minutes later, the Black Knights got on the board as Wachacha hit Jumper on a 6-yard pass.  Freddie Romero added the extra point to cut into Cherokee’s lead at 12-7 at the half.

The third quarter was all Robbinsville who would score twice to take the lead.

First, Ian Wiggins returned a blocked Cherokee punt 25 yards for a touchdown at the 6:52 mark of the third quarter.  Reece Adams ran for the two point conversion to give the Black Knights a two-point (15-12) lead.

Four minutes later, Romero split the uprights on a 34-yard field goal to put the Black Knights up by six points (18-12) going into the fourth quarter.

Early in the fourth, Cherokee re-took the lead as Tye Mintz ran the ball in from 10 yards out.  Tino Pete added the extra point and the Braves led by one-point (19-18) at the 9:31 mark.

Then, with just less than four minutes left in the game, Evans ran for his second score of the game – a 5-yard run – to give the Braves a 25-18 lead and the win.

To view or purchase photos from this game, visit: https://onefeather.smugmug.com/SPORTS/FOOTBALL/BRAVES-FOOTBALL-2016/At-Robbinsville-October-28/

Cherokee hosts the Hayesville Yellow Jackets (2-7, 2-3) at Ray Kinsland Stadium on Friday, Nov. 4 for their final regular season game of the season.