American Indians have served in the U.S. military in every major conflict since the American Revolution.  That fact was given by Kevin Gover, National Museum of the American Indian (NMAI) director and member of the Pawnee Nation of Oklahoma, to a group of veterans and community members gathered for a consultation meeting, held at the Steve Youngdeer American Legion Post 143 headquarters in Cherokee on Friday, Oct. 28, on the future National Native American Veterans Memorial.

“What’s really important is that Indian Country feels this monument represents them,” Gover told the crowd who was asked for their input and thoughts on the project.

The Memorial will be located on the grounds of NMAI between the National Air & Space Museum and the U.S. Capitol, but an exact location on those grounds has not yet been established.

“If all goes well, we will unveil this on Veteran’s Day 2020,” Gover commented of the timeline for the project. 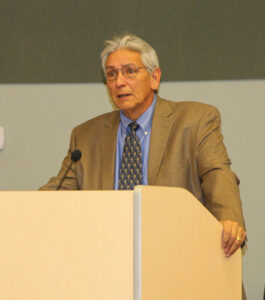 The project is being administered by a 24-member Advisory Committee that is co-chaired by former Sen. Ben Nighthorse Campbell, a member of the Northern Cheyenne Tribe, and Jefferson Keel, the lieutenant governor for the Chickasaw Nation of Oklahoma.

Gover said Friday’s consultation meeting was the fifteenth such event held in a series of meetings that began in January and is slated to last a total of 18 months.  The call for design proposals for the Memorial will go out in the fall of 2017 and construction is scheduled to start a year later.

“If we do this well, we think it will be a very powerful experience for those who come to see it,” Gover noted who stated that the symbols and images portrayed at the Memorial will need to be selected with great care.  “Somehow, this Memorial has to be pan-tribal.”

Discussions held during Friday’s meeting included: the size and scope of the facility, special honoring of Medal of Honor recipients, scope of tribes to be included, how to portray the stories and images, etc.

“There’s a lot of stories that could told, and I think there’s a lot of things that should be told, especially given the opportunity of developing a true monument to American Indian warriors,” said Principal Chief Patrick Lambert, a U.S. Army veteran.

Chief Lambert spoke of the bravery of PFC Charles George, an EBCI tribal member and Medal of Honor recipient, who sacrificed his life to save several comrades during the Korean War.  A bronze statue of PFC George was recently placed at the Charles George VA Medical Center in Asheville, and a second statue has been cast and will be unveiled at the Cherokee Veterans Park on Veteran’s Day, Friday, Nov. 11 at 11am.

Chief Lambert proposed the idea of casting a third statue of PFC George that would be presented to the Memorial if so liked.  “The story of Charles George is one that is worthy of being told.”

Brian Patterson, a member of the Oneida Nation of New York and immediate past USET president, was on hand for the meeting and commented, “It’s a tricky position that we find ourselves in on how to tell our own story.  The red in that flag is the blood of our collective ancestors as well.”

Gover said the Advisory Committee is about to start a fundraising campaign for the project with a goal of $15 million which is not an exact budget, but represents their best estimate.  The exact costs associated with the project will not be known until the design phase is complete.

“We can’t use our federal funds we receive from federal appropriate every year,” he said.  “So, all funds to support this Memorial will have to be raised privately.  That’s not unusual.  All recent memorials – World War II, World War I, Korea – were funded privately.”

Vice Chief Richard G. Sneed, a Marine Corps veteran, gave concluding remarks at the meeting, “It is not a story that is going to be able to be told in just one fixture.  Just in the discussions we’ve had today, and in listening to the comments from everybody, there are all these aspects of this project that I hadn’t even given thought to.  I sort of had that stereotypical thought in my mind of what this was going to look like, but when you start to dig deep on how far back our history of Native American involvement with the military goes, it’s a phenomenal story, and there are so many nuances to it.”

To learn more about this project or to donate, visit: https://nmai.si.edu/support/national-native-american-veterans-memorial/ 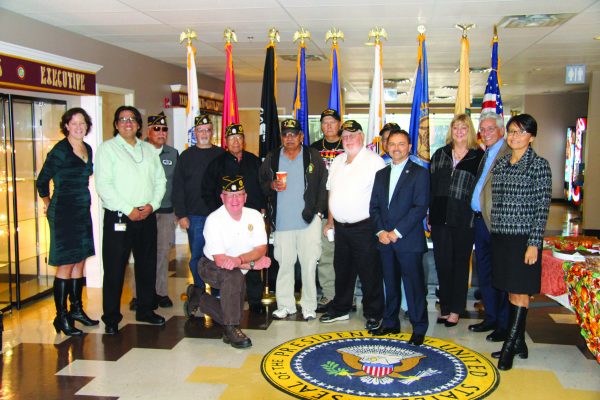 INPUT: Tribal leaders and veterans of the Eastern Band of Cherokee Indians gather for a group shot prior to Friday’s consulation meeting.