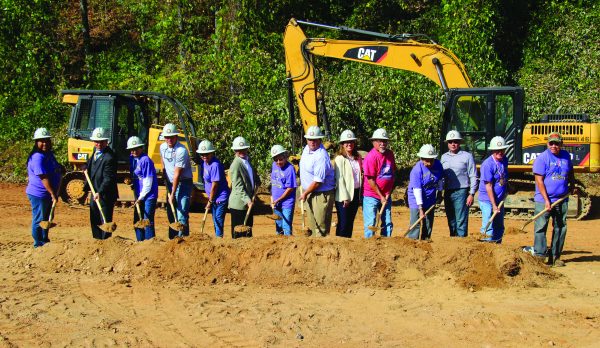 Jody Taylor, an EBCI tribal elder from the Birdtown Community, had a vision, along with other seniors, to be able to practice certain sports for the Senior Games without having to leave town.  Three years ago, she put in legislation for the Cherokee Senior Athletic Center to be built and ground was broken officially starting the project on the afternoon of Wednesday, Oct. 26.

“This is a big event for our Cherokee Life seniors,” said Janelle Rattler, Cherokee Life Recreation Senior Games coordinator, who related that she attended her first state Senior Games event in 2002.  She said there were nine EBCI seniors participating in 2002, and they ended 2016 with a total of 95 participants.  “This Center will provide a place for them to practice bocce, horseshoes, and shuffleboard and hopefully, in the future, hold local Senior Games events that qualify them for Raleigh.”

Rattler went on to comment, “In establishing this Center, this will ensure that our elders keep physically active and help keep them healthy.”

The Center, which comprises 18,586 square feet, will include three horseshoe pits, four shuffleboard areas, two bocce areas, and a championship bocce area.  The total budget for the project is $545,400. 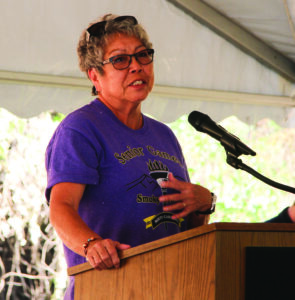 PROUD EFFORT: Jody Taylor, an EBCI elder from the Birdtown Community, speaks during Wednesday’s event. She submitted legislation to Tribal Council three years ago that led to the Center being built.

Principal Chief Patrick Lambert noted, “As you can tell from the drawings here that have been put together by the architects that it’s going to be a really nice facility, and it’s going to work really well.”

He recognized the efforts of Taylor as well as Birdtown Rep. Albert Rose of which he said, “He’s been really tenacious at pushing this project forward and making sure that he keeps the fire lit under each one of us to get the job done.”

Chief Lambert added, “There’s a lot of activities that are happening for the seniors and the current Tribal Council and Executive Office want to really support you guys and show you that we care about you.  Over the past two years, I’ve heard a lot of the concerns of the elders, and that’s one of the things I want to keep pushing on is to make sure that we satisfy the needs and wants and the importance of keeping people active and socially active with each other.  Because, I think that’s what keeps us all young and especially young at heart.”

Vice Chief Richard G. Sneed said, “I think this project really speaks to how the Tribe continues to really provide for its elders, and we really just continue to demonstrate not only with words, but with actions…we’re really leading the way, not only in the state, but I think in Indian Country in how we honor our elders here in Cherokee.”

Rep. Rose thanked Taylor for bringing forth the legislation that started the project.  “This project has been a long time coming, and today is really a celebration for our seniors.  Now, they know they’re going to have a place they can come to practice and work on their skills before they go off to competition.  That’s wonderful.”

He touched on the importance of projects such as this one.  “We can build casinos.  We can build data centers.  We can build adventure parks, but when you can turn a shovel on a project in your community that helps your seniors or your youth, that’s a good day.”

Birdtown Rep. Travis Smith said he remembered that years ago a motel was located in the spot where the groundbreaking was occurring.  “Our Tribe’s come a long, long way since those days…it’s grown a lot.  Some good things are coming, and some good things have gone away too.”

He said the Eastern Band of Cherokee is a very fortunate Tribe.  “We need to reflect that we’re very fortunate to be Cherokee.  That’s something I would hope everyone holds near and dear to their heart.  It’s a good day…”

Taylor thanked tribal leaders and officials for helping to make the project a reality.  “When I set my mind to something, it sets.  I want to thank the Chief, the Vice Chief, Albert Rose, Travis (Smith), and everybody that had a little bit to do with this project.”

She said herself and her fellow seniors truly enjoy participating in the Senior Games.  “We do love to compete. When we go to Raleigh, people know us, and they just tremble,” she joked.  “But, it is so much fun.  We do represent the Eastern Band the very best that we can.”

The project is estimated to be completed in spring 2017.

To view or purchase photos from this event, visit: https://onefeather.smugmug.com/COMMUNITY-and-NEWS-EVENTS/2016-Community-and-News-Events/Cherokee-Senior-Athletic/i-M7JDjcq