A bevy of songs and monologues will fill the Chief Dugan Cultural Arts Center as Cherokee High School students will present “Short Attention Span Theatre” on Thursday, Nov. 10 at 7pm.  The performance, featuring 24 students in the Cherokee Musical Theater program, will include snippets from over 20 Broadway shows including “Wicked”, “Hercules”, “The Sound of Music”, “Hamilton”, and more.

“We’re hoping to make it a yearly tradition that we do ‘Short Attention Span Theater’ in the fall,” said Michael Yannette, Cherokee High School and Middle School director of choir and musical theater.  “This is really a way for our kids to do some individual work, and this year we had them do a standard musical theater audition which is a song and a monologue in order to get a part for ‘Beauty and the Beast’.  The kids just did a great job in developing these individual songs and monologues so we thought, why not put it into an evening?”

He added, “So, the whole evening is three to four minute songs from 20 Broadway shows…the Cherokee Chamber Singers group is actually doing a piece from ‘Hamilton’.” 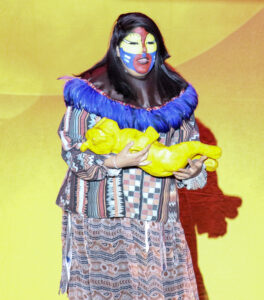 Ella Montelongo, shown in the part of Rafiki in Cherokee Musical Theatre’s May production of “The Lion King Jr.”, is set to perform a song and scene from “Wicked” as part of the upcoming Nov. 10 “Short Attention Span Theater”. (SCOTT MCKIE B.P./One Feather)

Yannette said that Yona Wade, Chief Dugan Cultural Arts Center director, is going to do a special feature that evening as well.  “He is ridiculously amazing, and we’re actually going to sing a song together.  And, I’m playing piano all night so it’s totally live music in every way.”

Jake Sneed, CHS Chorus president, will be performing a song from “Hercules” entitled “Go The Distance” as well as doing a monologue from the musical “You’re a Good Man Charlie Brown”.

“I’m really thankful for Mr. Yannette and all of the opportunities he’s opened, not only for me, but for the students as a whole.  We’re all very grateful.”

Ella Montelongo, CHS Chorus vice president, is set to perform a scene from the musical
“Wicked” as well as a song from the piece entitled “I’m Not That Girl”.

She is excited about the upcoming show, “Nobody’s ever done this before, and it’s very creative how he (Yannette) put it together.  All of the people that are doing it are really, really talented.  Some of them haven’t even gotten up and sung in front of anybody before, and I think this gives them the opportunity to go up there.”

The doors open for the Nov. 10 show at 6pm, and tickets will be available at the door for $3.  “We’re trying to keep ticket prices really low.  We just want people to come and see our kids perform.  We’ve had amazing, incredible School Board support, and they’re funding so much of what we do so we can keep it at a low cost.”

In May, the Musical Theater Department presented Disney’s “The Lion King Jr.” which was the first musical performance in the history of the school.  They are following that up with Disney’s “Beauty and the Beast” which is set for the last week in April 2017.

Yannette related that casting has already occurred for the show, and a total of 24 students were cast into parts with another 20 slated to work the stage, lighting, and other behind-the-scenes jobs.

More detailed information, such as ticket prices and exact dates for “Beauty and the Beast”, will be reported at a later date.