On Oct. 4, 1968, tribal leaders from the Eastern Band of Cherokee Indians, the Mississippi Band of Choctaw Indians, and the Seminole Tribe of Florida met and formed an organization that would become USET (United South and Eastern Tribes).  The organization has since grown to 26 tribes, and its 2016 Annual Meeting opened during the morning of Monday, Oct. 24 at Harrah’s Cherokee Casino Resort.

“There’s some discussion that a lot of times, these meetings turn into a free trip for the people involved,” said Principal Chief Patrick Lambert, “But, there’s real work to be done, and I know the Board here and the Executive Committee all feel very strongly that there’s work to be done…we’re very thankful for all that we do have and the blessings that have been bestowed upon us.” 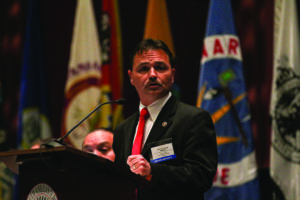 During his opening, Chief Lambert hit on the origins of USET and said the Tribe still is in possession of the table used at that first meeting.  “At a little seven-sided table, the original founders of USET sat down and penned the Unity Document – the Declaration of Unity was signed right here in Cherokee…that created USET, and our ancestors who penned that document did so by the authority invested in them by the people of their tribe…we’ve come a long ways from that seven-sided table.  Just look at the facility that we’re sitting in today.  But, our heart and our will remain just as strong.”

The USET Board of Directors and attendees had many issues facing Indian Country on the meeting agenda including: transportation, sovereignty, federal gathering rule, rural business, IRS rules, and updates from federal agencies such as the BIA and the Indian Health Service.

“I hope everyone enjoys their stay, and I’m looking forward to having some good meetings this week,” Tribal Council Chairman Bill Taylor told meeting attendees.  “We’ve got some good presenters here this week.  I’m glad to see everyone here.” 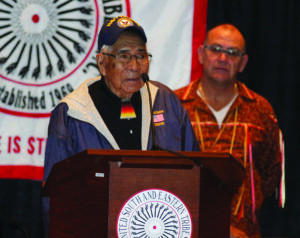 Brian Patterson, USET president, welcomed all of the tribal leaders and said, “Against all odds, we still remain, and our unity and our solidarity has never been stronger as we move forward.”

He added, “We are a in a time of prophecy.  As you see reflected throughout this whole agenda, that is if we don’t define this next era in Indian Country, it will be defined for us.”

EBCI Beloved Man Jerry Wolfe gave an opening prayer, and he was also honored for his service in World War II.  Also honored during the event were EBCI artists Butch and Louise Goings who were presented a photo print of “The Shadow of the Bear” taken by EBCI photographer Jeremy Wilson.  The Goings were honored for being named 2016 recipients of the Jennifer Easton Community Spirit Awards, an honor given to them earlier this month in Rapid City, SD by the First Peoples Fund.

To view or purchase photos from this event, visit: https://onefeather.smugmug.com/COMMUNITY-and-NEWS-EVENTS/2016-Community-and-News-Events/USET-Opening-Ceremony-October/