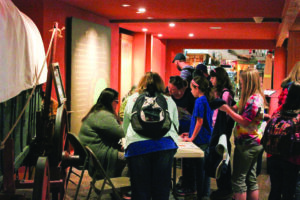 On a bright, sunny day, the Museum of the Cherokee Indian was one of four sites in North Carolina to celebrate International Archaeology Day on Saturday, Oct. 15.

Maney helped visitors write their first name in the Cherokee Syllabary, and there were sifter boxes set up so visitors could try their hand as if they were at a dig site. 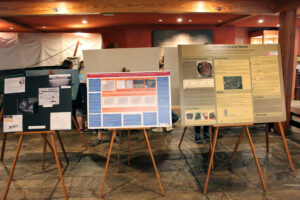 A display was set up in the Museum lobby featuring information from Dr. Brett Riggs as well as the EBCI Tribal Historic Preservation Office.

The event did not solely focus on historical Cherokee, but modern-day life of EBCI tribal members as well.  “It hopefully showed that we are more than just bones, beads and forgotten,” said Dawn Arneach, Museum Box Office manager, who helped plan the day’s activities.  “Our stories, traditions and language that we carry on today are just as important to us, as what archaeologist uncover in their digs about our past.”

Several visitors tried their hand at throwing the atlatl and playing chunky. The Museum reported that over 300 people attended Saturday’s event.