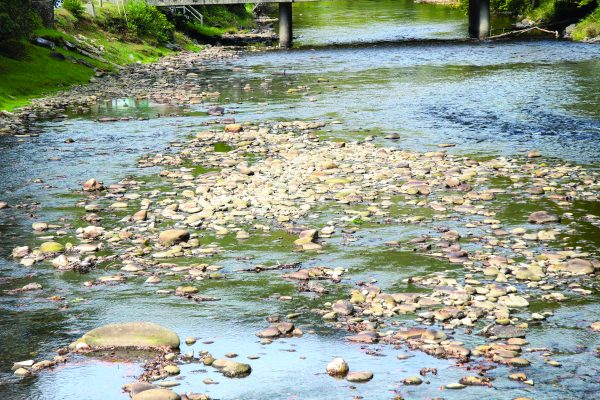 In this photo, taken Thursday, Oct. 6 at Saunooke Village, the Oconaluftee River shows the effects of the severe drought the Cherokee Indian Reservation is currently experiencing. (SCOTT MCKIE B.P./One Feather)

Cherokee’s water supply is fine despite the fact that the reservation is located in two of seven western North Carolina counties classified as being in a “severe drought” by the N.C. Drought Management Advisory Council.  Jackson and Swain counties, the two counties in which the Cherokee Indian Reservation sits, are joined by Cherokee, Clay, Graham, Macon, and Transylvania counties.  Statewide, a total of 15 counties are in a “moderate drought” and another six are “abnormally dry” – all of which are located in the western part of the state.

“We are very fortunate, our source water comes from two different tributaries,” said Sheila Hyatt, Cherokee Water Treatment Plant manager.  “We receive water from the Big Cove side (Raven Fork) and from the Great Smoky Mountains National Park side (Oconaluftee).  This allows us the capacity of withdrawing from two different water sources.  Sometimes, it rains in the Park which increases the water level, or it can rain the Big Cove area to increase the level.”

Hyatt said there are three stages of water conservation including a Water Shortage Advisory, a Mandatory Water Restriction, and a Mandatory Water Shortage Crisis.  “The water level is low but hasn’t reached the level that it is necessary to enforce the first stage of the conservation measures.  Water plant personnel diligently watch the water levels throughout the day during stressful times such as this.”

She said rain can be a double-edged sword in her line of work.  “You love to see the forecast of rain during trying times such as what we’re experiencing now; but, then again, when it gets here you hate it because of the turbidity (clarity of water).  Runoff from river banks, construction sites, or grading can be hard to remove from the water and usually has to be processed several times.  Water production is enforced by EPA’s Safe Drinking Water Act, and we must adhere to all rules and regulations accordingly.”

Hyatt added, “We are serious, committed, and take pride in our jobs.  We have a whole community that relies on us for safe, adequate drinking water.”

Now, what about the fish?

“Trout require flowing, well-oxygenated, cold waters (50s and 60s) for optimal growth and survival,” said Jeremy Hyatt, EBCI Secretary of Administration, relaying some information from the EBCI Natural Resources Program under the management of Michael Lavoie.  “Natural patterns of floods and droughts can often cause fluctuations in wild fish populations due to changes in food availability, temperate-related stress, and impacts to spawning habitat.  Over the long-term, wild trout are adapted to these fluctuations and are able to persist.  The EBCI Natural Resources program monitors our fish populations in tribal streams to monitor long-term population dynamics that may be affected by environmental fluctuations such as droughts.”

He went on to say, “The ongoing severe drought, in combination with high summer temperatures, have placed burdens on operating our Tribal Hatchery at full capacity.  Presently, water conditions are as low as the hatchery manager has seen them in his over 16 years of experience working at the facility.  We presently have six raceways shutdown due to a lack of water that could be supporting up to 60,000 lbs. of fish for the stocking program (approximately 20 percent of capacity).  If trends continue, we will likely have to shut down an additional four raceways in the near future.”

Jeremy Hyatt said trout are stocked in EBCI Enterprise Waters at high rates that average 230,000 lbs. per year.  “The disruption in production due to low flows places barriers to effectively and reliably producing our stocking needs.  High summer temperatures this year, on top of low water levels, has also placed increased stress on existing trout resources resulting in slowed growth and vulnerability to disease.  The hatchery experienced a health issue, caused by an incoming bacterial pathogen found in the stream used to supply the facility, which resulted in both stocking delays and increased treatment costs.”

Even with this, effects on fishing in Cherokee are minimal at the moment.  “Presently, the KOA ponds are still shut down due to low flow levels, which prevented their annual tournament from being held as normal last Saturday.  Tagged fish were stocked in the river instead.”

Jeremy Hyatt said annual fishing permit sales over 51,000 have been the best on record.  “That said, our August permit sales were down approximately 20 percent as the drought effects became steadily more significant.  We are hopeful that conditions improve as October is traditionally an important month for permit sales.  Stocking levels were down 2 percent this year due to impacts from the fish health issue and closure of ponds.”