Qualla Housing Authority (QHA) is under investigation “regarding possible criminal conduct” according to a letter sent from the Department of Justice to various QHA officials dated Tuesday, Oct. 4.  The letter states, “The allegations under investigation include possible violations of federal program fraud, mail fraud, and wire fraud…”

The letter instructs QHA personnel and officials not to tamper with any documents relating to this case including “information concerning loans, loan applications, customer files, banking records, grant information, and all other business records”.  Letter from DOJ to Qualla Housing 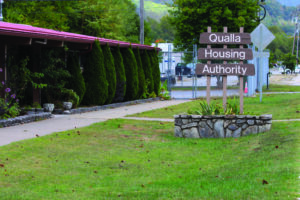 Qualla Housing Authority (QHA) is under investigation “regarding possible criminal conduct” according to a letter sent from the Department of Justice to various QHA officials dated Tuesday, Oct. 4. (SCOTT MCKIE B.P./One Feather)

As of press time, no charges have been filed in this case.  Also, a specific time frame was not given in the letter as to the scope of the investigation.

“My office is taking the investigation conducted by the U.S. Department of Justice, U.S. Attorneys Office, and the IRS very serious,” said Principal Chief Patrick Lambert.  “Cherokee families deserve a government that is open, honest, and above board. That is why I have directed all Tribal Departments and programs that are involved to fully cooperate and provide all information needed conduct a thorough investigation into all wrongdoing.”

Chief Lambert addressed Tribal Council on Monday, Oct. 10 and related, “We received an audit notification from the IRS asking for substantial records from the Tribe, particularly including payments to tribal employees and tribal officials.  At the same time, we’ve been officially notified that there is a federal, criminal investigation of prior Qualla Housing and HCD files and actions.  So, I’ve instructed the Secretary of Treasury, the Attorney General, and the Secretary of Housing to compile all of the documents that have been requested and to cooperate fully with the investigation.  I just ask that each member of the Tribal Council will join me this morning in pledging to provide all of the documents requested and to cooperate fully with the investigations.”