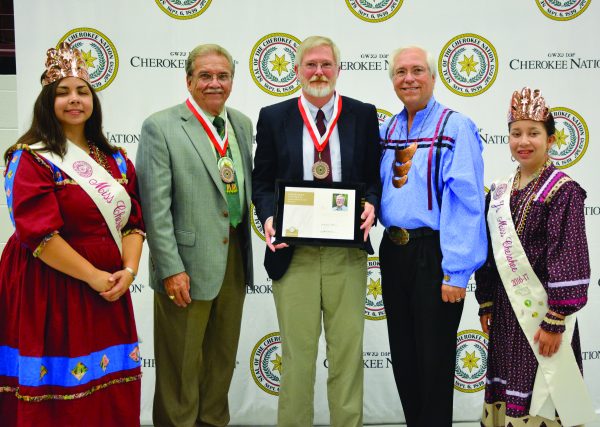 It is the highest honor the Cherokee Nation of Oklahoma presents to non-Cherokees for their dedication to tribal history, heritage and sovereignty. The award was presented by Cherokee Nation Principal Chief Bill John Baker during the 64th annual Cherokee National Holiday Awards dinner in Tahlequah, Okla., earlier this month.

“Dr. Riggs is a fitting and deserving honoree for the Cherokee Nation’s Samuel Worcester medal because he has devoted so much of his time, research and expertise on the unique history of our tribal government in America, first in our homelands in the Southeast and the eventual removal to modern-day Oklahoma,” said Baker. “His admirable work as an academic historian has enriched our ability and capacity to know more about the past and where Cherokee people came from originally. He has dedicated his life to protecting Cherokee Nation’s rich story and this is a small way to say ‘thank you’.”

Riggs has been instrumental in documenting removal-era roads, trails and Cherokee home sites that provide the basis for the expansion of the Trail of Tears National Historic Trail in southwestern North Carolina. He also is continuing to work toward interpretive development and marking of the historic landscape in the region.

“I feel deeply honored to receive this recognition from the Cherokee Nation,” Riggs said. “Native peoples sometimes take a dim view of archaeology, my chosen profession, and if my work helps connect Cherokee people with their personal and community histories, then I think I’m addressing one the most pressing mandates of our discipline. I’m grateful to the people of the Cherokee Nation, the Eastern Band of Cherokee Indians and the United Keetoowah Band of Cherokee Indians for allowing me to work with them in illuminating the Cherokee experience, and I hope to continue these cooperative efforts in the spirit of Rev. Samuel Worcester.”

Previously a research archaeologist at the University of North Carolina at Chapel Hill, Riggs joined the WCU faculty in 2015. He has worked continually with the Eastern Band of Cherokee Indians on various projects throughout the years.

As cited in presentation of the award, he assisted in the creation and completion of a project to showcase interpretive sites related to the history of the Cherokee Trail of Tears, a project of the North Carolina Chapter of the Trail of Tears Association. The Blue Ridge National Heritage Area Partnership provided a grant for the creation of a website, nctrailoftears.org, and a printed guide and map. Both describe the 16 wayside exhibits erected by the chapter in recent years to interpret the history of Cherokee removal in the 1830s at significant sites. These include military posts, roads used for the movement of troops and Cherokee deportees, and sites of Cherokee organization and resistance against forced removal.