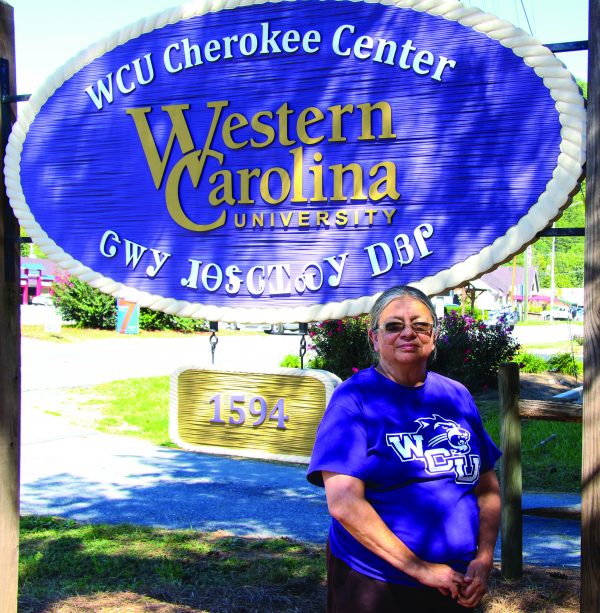 Roseanna Belt, WCU Cherokee Center, stands in front of the Center sign on Friday, Sept. 30 – the day of her retirement from the Center after a 15-year span in the position. (SCOTT MCKIE B.P./One Feather)

Roseanna Belt was busy moving boxes of personal belongings out of the Western Carolina University Cherokee Center on the afternoon of Friday, Sept. 30.  After 15 years with the Center, she has hung up her boots and retired at the end of Friday’s shift.

“In terms of having Western and the community involved with each other, I feel like we got a number of things going,” she said.

One thing that occurred during her tenure that she’s proud of is the Judaculla House, but she’s quick to point out that she can’t take credit for it.  “One thing that I thought we should do from the time I started working at Western was to have a special place for Cherokee students and Cherokee programs.  We had a particularly strong group of students who were leaders, for a few years, and they got busy and got a house down in the Greek village…for three years, we had a house there.  The coolest thing about it was that instead of Greek letters above the door, it had Cherokee syllabary that said ‘Judaculla’.”

Some of the other things the Cherokee Center has been involved in include providing WCU student tutors to the Cherokee Youth Center and the establishment of the Eastern Band of Cherokee Day football game which highlights Cherokee culture as well as tribal leaders and members who have participated in the pre-game coin toss.  Belt said that Jakeli Swimmer designed a Cherokee stickball logo that was used on WCU helmets during a game a few years ago.

She has high hopes for the future of the Center.  “I am optimistic that things will grow and improve.  There’s enough people there that want that to happen.”

One of her main goals over the years has been to improve the relationship between the university and the Tribe.  “There are always people there that really make an effort to see that we work closely together, but it’s not always an easy task.  The Cherokee Preservation Foundation developed right about the time I started so I think that’s built some of the relationship because a lot of Western people applied for grants from the Foundation.”

In retirement, Belt will not be completely gone from the scene.  She still plans to stay active on several committees including the Jones-Bowman Fellowship and RTCAR (Revitalization of Traditional Cherokee Artisan Resources).

“My goal since college myself has been education and building our kid’s resources to go to college,” Belt commented.  “It was the early 70s when I started college and we had all of the obvious problems – homesickness, not being academically prepared, not having funding; and really, although there’s been a lot of improvements, we still have a lot of the same problems.”

She added, “It’s still a struggle, so anything that I can do community-wise to help the education of our students, I will certainly try to do that.”