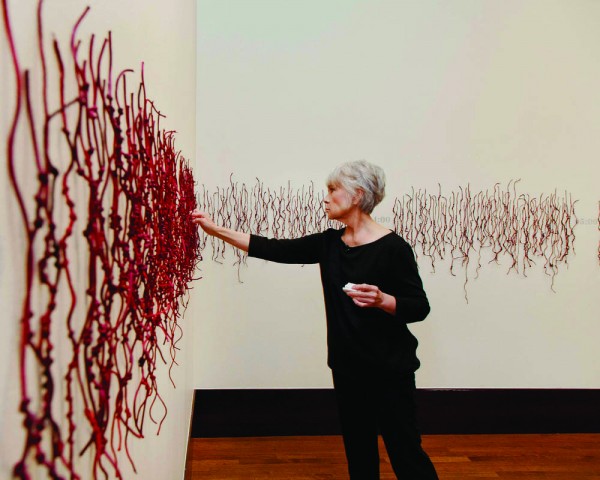 Luzene Hill, an EBCI tribal member, is known worldwide for her out-of-the-box visual arts.  She has shown her work in New York City and Russia and on Wednesday, July 20 was awarded a $20,000 Native Arts and Cultures Foundation (NACF) National Artist Fellowship.

“The Native Arts and Cultures Foundation Fellowship is a coveted prize, and I’m truly grateful for this award,” said Hill.  “I’m honored to have my work recognized in this way and very excited to have funding for my new work.”

She has begun two new projects.  “I continue to explore the Inka khipu motifs that informed ‘Retracing the Trace’, which is currently being exhibited at the Eiteljorg Museum.  Both of my new installations will address the issue of violence against Native American women through traditional symbols and references.” 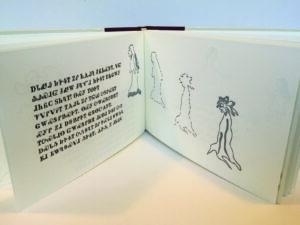 A drawing by Hill entitled “Shapeshifting” appears in a book entitled “Spearfinger”.

When asked what direction her artwork is taking these days, Hill responded, “For the last several years, I felt I was working on parallel, but separate, paths as I made conceptual installations about violence against women and with illustrations for Cherokee language instruction books.  The illustration work led to the production of a letterpress artist’s book, “Spearfinger”, that was completed this spring.  As I worked on that book, initially planned to be bi-lingual, I came to feel it was important to assert indigenous language sovereignty by making it in Cherokee syllabary only.”

Hill added, “I’ve been reading Sarah Deer’s books and embrace her idea that the key to stopping violence against Native women is to reclaim our languages and our original cultural values.  This thinking helped me realize that my parallel paths of interest – the language and empowering Native women – are now converging as I embark on new work.”

She was previously named an Eiteljorg Fellow and a First Peoples Fund Fellow, and this spring Hill participated in a Native art show entitled “Culture Shift” in Montreal, Canada.  “These experiences and connections have expanded my awareness of issues that affect all indigenous people in the Americas.  It also expanded my knowledge of new art that’s being created by a wide range of talented and passionate artists.  I’m very interested in the work of Doris Salcedo, who lives in Colombia, and I continue to explore and research pre-contact art, which is a rich resource that provokes my own art making.”

Francene Blythe, an EBCI tribal member who also has Dine’ and Sisseton-Wahpeton heritage, is the NACF director of program.  She commented, “NACF fosters and supports the vision, creativity and innovation of Native artists in a number of disciplines that feature the ongoing vibrancy and range of artistic careers and accomplishments across the U.S.  We are honored to award this year’s National Fellows.  They, too, continually raise the visibility of Native arts and cultures to higher levels of achievement, excellence and endeavor.”