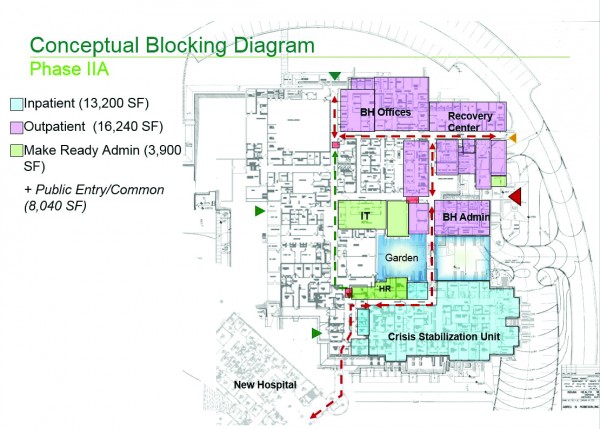 A week after ground was broken on the future Snowbird Residential Treatment Center, the construction of a Crisis Stabilization Unit to further help those struggling with substance abuse was discussed in Health Board on Wednesday, July 20.  The proposed Unit would be located at the old Cherokee Indian Hospital site and is part of the hospital’s Phase II Renovation.

“It moves all of Analenisgi and the center-based services into the old hospital,” Casey Cooper, Cherokee Indian Hospital CEO, told Health Board.  “This would allow us to be self-sufficient and kind of unplug ourselves from the dependency that we have on the state crisis network system.”

The facility would include 15 beds, 12 of which would be dedicated mostly to substance abuse patients with the remaining three for high acuity patients.

Tribal Council Chairman Bill Taylor stated that it’s important for patients to have a place to go prior to entering a rehabilitation facility.  “If they don’t have that, then more than likely they’re going to relapse.  And, I think we’re failing them right there.”

He inquired how many beds are currently being used for this at the new hospital.

Cooper replied, “It averages about 50 percent of our beds.  Yesterday, we had 15 patients in the In-Patient Unit and eight of them were substance abuse or detox-related patients.”

During Wednesday’s discussion, Forrest Parker, Cherokee Indian Hospital Authority executive director of engineering, gave a presentation on the proposed Unit where he related that there is 66,000 square feet of functional program space at the old hospital.  “Currently, 50,000 square feet of that space is unassigned.  It doesn’t have operational hospital programs in it such as maintenance, housekeeping, human resources, IT, and the like.”

Parker related the renovation plan would include the following space allotments:

The remaining space will be addressed in Phase IIB renovations.

Parker said the project would take approximately 22 months from start to finish.  “That is taking it all the way from schematic design all the way to opening the doors for service.”

He said the total budget for the project is $23.8 million which includes $12.4 for construction, $1.7 million for design and consultants, as well as $4 million for contingency and escalation costs.

“We included a 5 percent escalation per item for three years.  That way, we know that we’re covering those and nothing can catch us off guard with market changes.  At this point, it’s just kind of industry standard to allow for 15 percent contingency.  Where we don’t have a design yet, we feel that’s the best way to go.”

Parker related that the age of the building is contributing to costs.  “One of the most important things that is driving the costs is we have $6 million of required infrastructure improvements and exterior skin remediation for the facility.”

He added that the building must be brought up to code once renovations start, and that will include sprinklers throughout the building, modifications to air flow, as well as dealing with water issues due to the age of the exterior skin.  “The old exterior has been there for a long time, and it’s really bad.”

Chairman Taylor asked if numbers had been developed for building an entirely new facility versus remodeling the existing structure.

Cooper related they have not but stated, “We absolutely will do that Mr. Chairman.  It’s a great idea.  Now, we have something to compare against.”

Vice Chairman Brandon Jones said, “I do think that we’re at a crisis point with our own community members.  I think we need to take care of our own first because if we can’t help ourselves, we can’t help anybody else.  So, I think we need to do everything we can to get this going as fast as we can because we see we’re two, two-and-a-half years out from being where we need to be to have a complete program.”

Cooper said he would like to discuss the project in further detail in a working session of Tribal Council.  “If this ends up not being the desire of tribal leadership, we want to be able to talk with you about some things that we can do that are short of this that would still help.  If it is the desire of leadership, we want to make sure you know that we’re committed to implementing your vision.”

Chairman Taylor said he will schedule the working session.