The Cherokee Life Recreation held a wrestling clinic last week at the Wolfetown Gym with John Hohmann, an Olympic wrestling coach with an extensive resume and background in the sport.  Hohmann, a retired Lieutenant Colonel in the U.S. Marines Reserves, is also a decorated member of the wrestling community with over 40 years of experience, 23 years as a competitor and over 35 years as a coach.

In 2000, Hohmann was awarded the 2000 Wrestling’s Developmental Coach of the Year by The United States Olympic Committee.  Although he is currently retired, Hohmann owns a wrestling club in his hometown of Melbourne, Fla. where he continues to coach wrestling and also finds the time to help out in a MMA club and local high school. 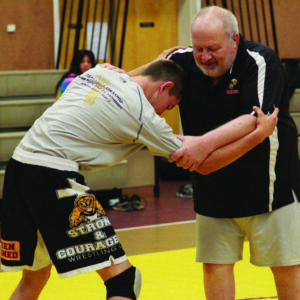 Seventeen kids from Cherokee attended the wrestling clinic that was held July 11-15 at the Wolfetown Gym in conjunction with the missionary work of Northside Presbyterian Church in Melbourne, Mission to the World in Birdtown, and Cherokee Life Recreation.  Throughout the clinic, the coaches taught new wrestling techniques and also presented daily Bible devotions and life applications for the kids.

Hohmann commented, “You guys (Cherokee) are in a really good situation here with Anthony Toineeta (defending 1A NCHSAA State Champion).  The kids love him and they have all that (State Champion) right here in town, which makes being a State Champion real.  Here’s somebody who grew up here, here’s somebody who submitted to the discipline of the sport with the best reward the state has to offer, being won…how did he do it?  He listened to his coaches, he went to the practices, and he made better decisions about his free time.  It’s about the decisions you make. He’s a champion because he made those right decisions.”

Youth Sports Coordinator with Cherokee Life Recreation, Tim Smith related, “I appreciate John coming here, and his resume speaks for itself.  He’s served his country, he’s serving the Lord, and he’s up here helping us get better (wrestling program).”