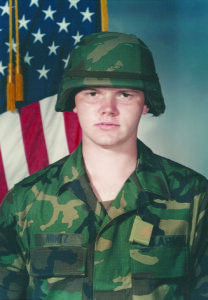 Christopher David Mintz, 45, of Waynesville, went home to be with the Lord, Monday July 18, 2016, in a Buncombe County health care facility. A native of Haywood County he was the son of Oscar Mintz and Sandra Roland of Waynesville. He was a lifelong resident of Haywood County and resided with his late grandmother, Marie Roland. In addition to his grandmother, he was also preceded in death by a maternal grandfather, Kelly Roland; paternal grandparents, John and Violet Mintz; one brother, Randy Fowler, and a nephew, Dillon Bernhisel.

Chris attended JROTC in High School and after High School he served in the National Guard where he spent five years. He also served as a volunteer Fire Department Member in Clyde for three years.

Chris enjoyed watching the NASCAR Races and singing in Church with his grandmother Marie.

Funeral Services will be held 2pm on Wednesday, July 20 at Crisp Funeral Home Chapel. Revs. Neil Roland and Roger Roland will officiate with burial in the Jarrett-Blythe Cemetery.

The family will receive friends from 12-2pm on Wednesday at the Funeral Home.