A team of researchers will spend time this summer looking into the Cowee Mound near Franklin without ever digging into the mound, and volunteers are welcome to join in the efforts.

Led by Kathryn Sampeck, Illinois State University associate professor of anthropology, the researchers will study various aspects of the mound as well as record and study artifacts from previous field seasons.

“We will be using several different sensing techniques such as Ground Penetrating Radar (GPR), gradiometry, and soil resistivity to look at the hilltop where the mound is in more detail, to understand how the townhouse mound relates to other parts of the Cherokee town,” said Sampeck.  “Cowee is really special because the mound is on such a high hill, overlooking the rest of the settlement.”

Sampeck said there will be no excavation at the mound during this project.  “We are making the most of nondestructive techniques to understand as much as we can without disturbing anything.  The place is in wonderful condition and so well protected.  We can create a careful, thoughtful plan for further research and to conserve Cowee in the best way possible for future generations.”

She said the hilltop to the east of the mound very well could have had homes or been a place where events were held.  “We are especially interested to see evidence of a dance ground or ball game field.  We want to understand how public places related to people’s homes, agricultural fields, and other work places.”

The team will also be studying an area where slag evidence from ironworking was previously found.  “This area is at the base of the hill with the mound.  It is an exciting possibility that Cherokees had their own forge so early, perhaps early in the eighteenth century.”

Sampeck said another area of interest to the team is lands across the river from the mound.  “Historic maps and descriptions show that the town was on both sides of the river.  The river was important to community life.  We want to understand the whole town and how different neighborhoods or sections related to each other and to the river.” 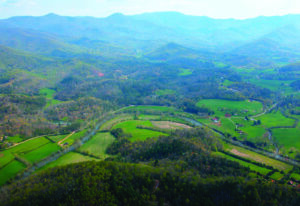 The project is being supported by various organizations including the EBCI Tribal Historic Preservation Office who is coordinating the fieldwork and research, the Historic Cowee School which is providing lab space, Illinois State which is providing supplies for the fieldwork, and the National Park Service and National Resources Conservation Service which are jointly providing remote sensing equipment as well as personnel to run them.

Tyler B. Howe, EBCI Tribal Historic Preservation Office, said, “Our role in the project is mainly an oversight role so we are overseeing and developing the scope of work.  What they’re doing out there this year is a little bit different in that there will not be any excavation work, only geophysical work.”

Howe said Cowee is being treated differently than a compliance project.  “This is more for scientific purposes.  It will really help us at Cowee knowing the extent of occupation.”

He related that the geophysical work helps preserve the area better than old-fashioned excavation work.  “We can be more precise when we do decide to open it up so the geophysical work will show us and highlight areas that are worthy of further investigation.  So, it’s kind of pin-pointing where to do the excavations in the future.”

Sampeck said anyone is welcome to volunteer at the site.  “Professional crew members will train people in all the steps for each activity.  We want people with little or no experience to have the chance to do the work that most appeals to them.  The fieldwork can be as simple as helping carry a cable for the GPR that other people are driving, pushing, or dragging.  Some equipment is like a big lawnmower.  Others require repetitive lifting, and others, such as GPS recording, are light, hand-held devices.  So, it can be everything from a great workout to a pretty pleasant time standing or walking.”

Help is also needed inside the laboratory itself.  “In the lab, people can help with the non-destructive analysis of the chemistry of different artifacts by helping place the artifacts in the machine and helping record the results.  We also need help with sorting ceramics and taking notes about them and measuring the size and weighing beads and slag fragments.”

Howe said this project has really been a three-way partnership between the Tribe, the Historic Cowee School, and Illinois State.  “This has been a great partnership.”

Sampeck said she became interested in Cowee after beginning to study 16th and 17th century Cherokee towns.  “For the past seven years, the staff at THPO and I have been looking at the ways different Cherokee towns related to each other at the beginning of the Colonial era when the Spanish tried to establish forts and towns in the region.  The evidence shows that Cherokees were key players in political, social, and economic affairs and the Spanish had a lot of dealings with them.  It’s also clear that Cowee was an important center in the 18th century, so it’s an important question to see how all of these communities related to each other and how the relationships developed over time.”

Work at the site will start Monday, July 18 and will continue through Friday, July 29.  If you’re interested in volunteering, contact Sampeck via email at ksampec@ilstu.edu.