Great Smoky Mountains National Park officials announced on Friday, July 8 that several of their Volunteers in Park (VIP) have received regional and national recognition for their outstanding service. The Cades Cove Bike Patrol team and Robert E. (Bob) Lochbaum were selected for their exemplary service from over 240,000 volunteers across the nation who donate their time, skills, and talents to the National Park Service each year. 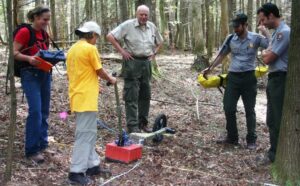 “Because of the dedicated service of these men and women, our visitors have benefited greatly,” said Park Superintendent Cassius Cash. “The Bike Patrol has not only prevented accidents, but they have also encouraged countless bicyclists through their encouragement, support, and assistance. And, the tireless work of Mr. Lochbaum has enabled us to better provide information to visitors about trail locations, distances, and terrain.”

The Cove Bike Patrol team was awarded the Southeast Regional Group Volunteer Service Award and the national George and Helen Hartzog Outstanding Group Volunteer Service Award. The team will travel to Washington, DC in August to receive the national Hartzog Award from the Director of the National Park Service.  Established in 2010, the team was created to provide assistance and safety awareness to bicyclists riding the 11-mile Cades Cove Loop Road on Wednesday and Saturday mornings, May through September, when the road is closed to vehicle traffic. Since the program began, there has been a 50 percent reduction in serious bicycle accidents during these morning closures, in spite of a 30% increase in bicycle use over the same time period. 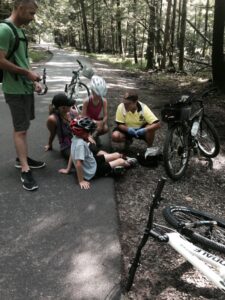 Bob Lochbaum is the recipient of the Southeast Regional Enduring Service Award. He began volunteering in the park over 23 years ago and has contributed over 15,930 hours of volunteer service which is equivalent to nearly 8 years of combined full-time service. Lochbaum has repeatedly measured and mapped all 848 miles of park trails and 270 miles of roadways using new GPS technology to provide exact mileages for official park maps and the National Geographic Trails Illustrated map.  He has also located, mapped, and described over 150 cemeteries within the park, adding many unrecorded cemeteries to the park inventory. This collective body of work both preserves park history and benefits visitors daily whether they hike a trail or take a scenic drive.