Coach Willis Tullos, who garnered his 600th career win this past season, will not be at the helm of the Cherokee Braves boys basketball team this upcoming season.  In a letter he received on Thursday, June 30 from Cherokee Central Schools officials, Tullos was informed that his contract would not be renewed and he was out of a job.

Tullos related that he told school administrators in March that he wanted to coach for two more years.  “A week later, I was subbing for Coach Mintz in the Arena and Scott Penland came over and said that Ms. Foerst (Cherokee High School principal) told him that I wanted to coach for two more years and that he was really glad that I had made that decision and that he thought that keeping the continuity in our program going was important.”

“That’s how I left it,” said Tullos.  “That was the last I talked with anybody, and that’s what I assumed we were going to do.”

Tullos coached summer basketball and did the classroom portion of Driver’s Education.  He said a friend brought two letters to his house on Thursday, June 30 that stated himself and his wife, Tanya Tullos, were not being recommended for renewal. 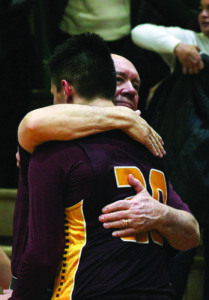 Willis Tullos, shown in January celebrating his 600th career win, will not be at the helm of the Cherokee Braves boys basketball program this next year as his contract has not been renewed. (SCOTT MCKIE B.P./One Feather)

Dr. Scott Penland, Cherokee Central Schools superintendent, said in a statement to the One Feather, “With every personnel move we make, our goal is always to improve the quality of education for the students at Cherokee.  All personnel decisions are well thought out.  There are no ‘knee-jerk’ reactions.  We always look at the pros and cons of every decision, and we do what we feel is in the best interest of our school system.”

Tullos said the entire situation came out of left field.  “We weren’t able to make any provisions because no one said anything.  If people tell you something, you can plan for anything, but when people don’t tell you anything until it’s over, there’s no way to plan for anything when it’s over.”

He was told there was not an appeal process.

“There were a lot of things that weren’t done right, but as far as explaining why, I can’t because we’ve not been given a reason.”

This past season, Tullos led the Braves to a 25-4 record, a share of the Smoky Mountain Conference regular season title, the Conference Tournament title, a Sectional title, and a state-record for most three-points in a season.  Those accomplishments didn’t go unnoticed.

“I had an opportunity come up yesterday (Thursday, July 7), and it was in the Smoky Mountain Conference, but we told them that we wouldn’t do that.”

Tullos and his wife are heading back to Philadelphia, Miss. where Tanya has accepted a position.  He previously coached the girls team at Choctaw Central, leading them to three state titles.

“I’ll find something to do somewhere,” he said.  “But, I just don’t know about coaching.  We’ll just have to see what turns up and what happens.”

The Cherokee School Board declined to comment on this issue.