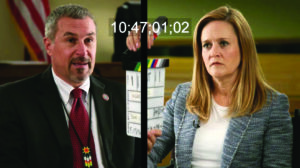 As part of the Cherokee Courts continuing effort to bring attention to the inequities of tribal court jurisdiction and to highlight the US Supreme Court Case of Dollar General v. Mississippi Band of Choctaw Indians, Chief Justice Bill Boyum appeared on “Full Frontal with Samantha Bee”.  The segment aired on June 20 on TBS/TNT, with a viewership of over 1 million people weekly, combining TV and online viewers.

In the episode, Chief Justice Boyum points out that, other than the narrow VAWA exception, non-Indians cannot be prosecuted in tribal court for criminal offenses against an Indian victim.  Samantha Bee finds this fact unbelievable and makes it the subject of the show.

“The segment brings to light the unfairness of tribal jurisdiction by satirizing the ironic circumstances in which a non-Indian cannot be prosecuted in tribal court, even if the victim is the tribe’s Chief Justice,” Boyum stated.  “The show also points out the ridiculous arguments made by Dollar General in their attempts to avoid civil jurisdiction in Choctaw tribal court.”

The United States Supreme Court ruled in favor of the Mississippi Choctaws on June 23.  The divided Court, in a 4-4 tie, let stand the 5th Circuit Court of Appeals ruling that the tribe had civil jurisdiction over this damages claim against Dollar General.

Samantha Bee, known for her wit and satirical comments honed during 13 years as a correspondent with “The Daily Show”, has long been a supporter of tribal sovereignty.  Her show was recently named as one of the 10 best TV shows of 2016 by Rolling Stone magazine.