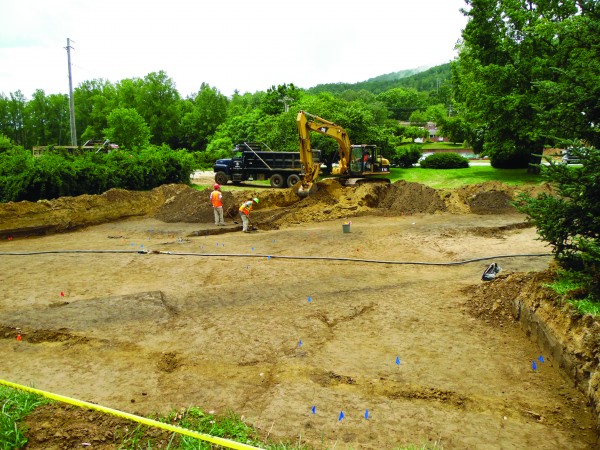 Crews from TRC Solutions work on an archaeological survey at the site of the old Cherokee Elementary School. The work is expected to take several months. (ROBERT JUMPER/One Feather photos)

Crews are on-site with bulldozers and shovels at the old Cherokee Elementary School site in the Yellowhill Community.  Archaeological work, being done prior to development, has currently begun and should be finished in early fall.

“When they did the demolition work at the old elementary school site, the Tribe wanted to be able to use that corner property as prime real estate for some kind of venture in the future, and so they need to have that cleared archaeologically so that they can proceed with whatever kind of construction activity they deem might be best,” said Russell Townsend, EBCI tribal historic preservation officer.  “When the school was originally built, the laws that are in place now to protect archaeology and, probably more importantly for us, the human remains, were not in place.”

He said as the school was built, “They plowed through portions of what are probably two large archaeological sites, and that includes the property where the BIA Agency is today.”

Townsend said before any development can occur at the site, “We need to clear it of any important archaeological data that remains intact.” 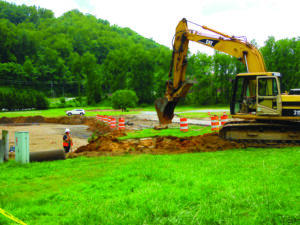 Work is currently occurring at the Woodland Period portion of the site.  “They are about a quarter of the way through the stripping of the four and a half acres.”

In comparison, the Ravensford Tract site where the current Cherokee Central Schools is located was 54 acres making it the largest archaeological project in North Carolina history according to Townsend.

The archaeological work itself is being done by TRC Solutions, an engineering and environmental consulting firm based in Asheville.  The scope of work for the project was developed by the EBCI Tribal Historic Preservation Office.  Townsend praised the work of TRC who he related has done many projects for the Eastern Band of Cherokee Indians including the new school campus at the Ravensford Tract.

“They have a long history of working with us,” noted Townsend, “and, they do everything our way.  They are phenomenal.  The level of background work they do before they go into the field is second-to-none.  I’ve never seen a firm that I think does better work.”

Townsend said the project itself began several weeks ago and is slated to be finished by the end of September.  But, in the meantime, there is a lot of work to be accomplished.  “They will basically go in and strip it all, and they will mark and map the archaeological features.  You can see those as stains on the ground.”

He added, “They’re mapping the features as they find them, but then they’re going to have to come back and excavate the features that are not burial features…they’re got a lot of field work ahead of them.  It’s a big project and a multi-component site that has Mississippian stuff on top of the Woodland stuff in some of the areas.  It’s going to really explain to us a lot about how we were living here on the Oconaluftee over the last 2,000 years.”

Once removed, the artifacts will have to be placed somewhere.  “For right now, our Museum is full so we are working on trying to build a curatorial facility that will house the Ravensford collections as well as the past 16 years of archaeology that we’ve got off the Boundary and basically don’t have any room for,” said Townsend.   “Right now, our contractors, such as TRC, are graciously storing that material for us for free which is a huge benefit, but all of those artifacts are the property of the Tribe.”

Several projects have been discussed for the site, but as of press time there are no specific plans in place.