Thompson Brothers Lacrosse instructors pose with some of the younger attendees at a Youth Lacrosse Camp at the Birdtown Gym on Wednesday, July 6. (SCOTT MCKIE B.P./One Feather photos)

For members of tribes of the Haudenosaunee (Iroquois) Confederacy, lacrosse is known as “the Creator’s Game”.  Young members of the Eastern Band of Cherokee Indians had a chance to learn more about the game, its history, and fundamentals at a camp, held at the Birdtown Gym on July 5-6, hosted by Thompson Brothers Lacrosse and the National Lacrosse League’s (NLL) Georgia Swarm.

“It’s a huge honor to have the opportunity to come down here and teach a native sport to a group of Native American kids because it’s in their blood,” said Bill O’Brien, a member of the Onondaga Nation who plays for the NLL’s New England Blackwolves.  “At the end of the day, these guys all play stickball, and that’s their medicine game.  It’s an honor to be able to come down here and show our medicine game, an Iroquois medicine game, and really give back.”

O’Brien, who started Thompson Brothers Lacrosse with his cousins Miles and Lyle Thompson, said giving back is one of their organization’s missions.  “We’ve all had success with lacrosse.  It’s kept us all off drugs and alcohol.  In Native communities, there are obstacles that face everyone such as obesity, diabetes, drugs, alcohol, poverty, and we truly believe that lacrosse, this medicine game, has the opportunity to heal those things.  It can bring entertainment to the community, put a smile on some kid’s face, give them something to work towards, and give them some inner drive to continue striving for goals.” 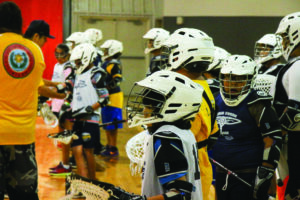 Some of the older kids get ready for drills on Wednesday.

Jeremy Thompson, a member of the Onondaga Nation who plays for the 2016 NLL Championship team Saskatchewan Rush, was at the camp along with his brothers Miles, Lyle, and Jerome Thompson who all play for the Swarm.

Jeremy commented, “It’s a heartwarming feeling when you can come to a different community and learn about a different culture.  While we’re bringing our culture and talking about our roots with the lacrosse game, the same thing kind of goes back to how they’ve introduced us to the stickball game.  It’s an amazing thing when you can come together and one of the biggest things that is heartwarming for us is when you can see the smiles and energy levels on the kids and how energetic they are.”

He said giving back is very important to all of them.  “It’s the least we can do, and the way we look at it is that if you can spend that one second, that one moment, with a child and inspire them in any way, I think that’s the main thing that makes us feel good.”

Jeremy added, “It’s all about being encouraging and being the best you can be, but yet encourage the people around you and most importantly is to have fun.  If you ask anybody, it really comes down to those things.  You’ve got to enjoy it.” 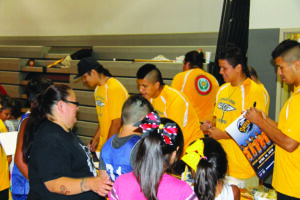 The Thompson Brothers sign autographs for the young participants.

The camp was held for beginner players with fundamentals and the history of the game being emphasized.  “These guys are very fundamentally sound,” Tim Smith, Cherokee Life Recreation youth sports coordinator, said of the instructors.  “They all started at young ages with fundamentals from their fathers and other coaches that they had, and I’m learning just along with these kids.  This is a new sport to us.  We do have our stickball.”

He said the instructors were impressed with the Cherokee kids at how quickly they picked up the game of lacrosse.  “We got a grant from the Cherokee Preservation Foundation for the equipment, and we want to start putting teams together.  Nobody west of Asheville, North Carolina plays.  So, we’re trying to build in this area, and then if we have to send teams to travel, then we’re willing to send teams.  We want to continue this relationship with the Georgia Swarm and the Thompson Brothers and Bill O’Brien for years to come.”

John J. Arlotta, Georgia Swarm owner and general manager, was at the camp and commented, “It’s really important to us because we want to give something back to the lacrosse community in general but very specifically to the Native American community because obviously that’s where the sport started.  The history of the sport and the tradition of the sport we think is an important thing to be taught and there’s nobody better to teach it than Native American players.”