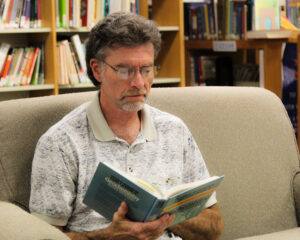 Earle Dixon, 61, an EBCI tribal member from the Painttown community, attended the Animas-San Juan River Conference, in Farmington, NM recently.  He attended the conference to present four papers as part of his environmental work in New Mexico from 2008-15.  He recently completed an MPA degree at the University of New Mexico and his thesis was awarded the 2015-2016 Ferrel Heady Award for Best Pro Paper.

The Animas River Spill happened on Aug. 5, 2015 in the upper part of the watershed near Durango, Colo. at the Gold King Mine where workers were attempting to perform maintenance on an earthen mine tailings pond.  The workers accidently breached the tailings pond and caused the release of three million gallons of acidic mine waste water loaded with heavy metals.  The tailings spill flowed downstream into New Mexico and Utah causing the Animas and San Juan Rivers to turn a toxic orange color, and officials closed the Rivers to all uses for a 12-day period.  The long-term impacts of the environmental disaster on the Animas-San Juan River ecosystem, drinking water supplies, agriculture and people are unknown.

The spill was especially hard on Navajo farmers as Navajo Shiprock Chapter President, Chili Yazzi, described at the conference.  Dixon is an environmental consultant with Tsali Associates in Cherokee and is employed with McGinnis and Associates in Reno, Nev. as a Senior Hydrogeologist-Scientist. Dixon has a bachelor’s of arts degree in geology from Appalachian State University, a master’s of science degree in hydrogeology from the University of Nevada Las Vegas, and an MPA from the University of New Mexico.  He also supports the Native American Mentoring Program at Southwestern Community College.