For EBCI tribal member Dylan West, art is not only a large part of his life, it is helping to shape his future.  West debuted his cartoon strip entitled “Yohn and Yona” in the July 23 issue of the Cherokee One Feather.  The strip will be a weekly feature in the paper. 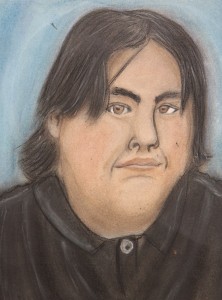 Dylan West, Cherokee One Feather’s newest comic artist, is shown in a self-portrait.

“We, at the One Feather, are excited to be collaborating with Dylan West,” said Robert Jumper, One Feather editor.  “He is a Cherokee artist who brings a youthful perspective to our comic section.  It is great to have an enrolled member contributing to the paper.”

West, 17, is a junior at Cherokee High School and the son of Hoss and Hazel Jumper and the late Jeannette Jumper.

“I plan to go to Japan and attend an art school there,” said West, “and, after that, I’ve been wanting to make simple graphic novels.”

West commented he has been working on his artwork “ever since I can remember”.

“He started when he was about three, and then he just kept going from there,” said Hoss Jumper who related he is overwhelmed at West’s artwork being featured in the paper.  “I’m just so proud of him.”

West’s favorite style of artwork is Manga which is a Japanese comic-style art.

While comics are his main line of interest, he has also made headway into the mainstream art world.  He received a Judge’s Choice Award at the 2015 Heard Museum Guild American Indian Student Art Show & Sale held in Phoenix, Ariz.