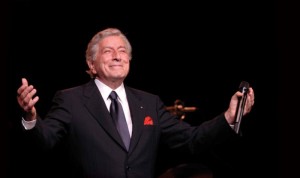 With millions of records sold worldwide and platinum and gold albums to his credit, Bennett has received seventeen Grammy Awards-including a 1995 Grammy for Record of the Year for his “MTV Unplugged” CD, which introduced this American master to a whole new generation-and the Grammy Lifetime Award.  His 2007 prime-time special, “Tony Bennett: An American Classic,” won seven Emmy Awards. His initial successes came via a string of Columbia singles in the early 1950’s, including such chart-toppers as “Because of You,” “Rags to Riches,” and a remake of Hank Williams “Cold, Cold Heart.”  He had 24 songs in the Top 40, including “I Wanna Be Around,” “The Good Life,” “Who Can I Turn To (When Nobody Needs Me)” and his signature song, “I Left My Heart In San Francisco,” which garnered him two Grammy Awards.